McLeods Daughters premiered on 8/8/2001, there were 8 seasons (224 episodes) and the final episode aired on 31/1/2009. The series was also sold internationally. The series centred around 2 half sisters Claire and Tess McLeod and their property Drovers Run and their affluent neighbours, The Ryans.

The Drovers Run scenes were filmed at Kingsford Homestead and it was a closed set from the public for 7 years but was run as a working farm.

Gawler hospital, TAFE and properties in the Sandy Creek area were used. Local service groups were invited to assist as extras for many scenes. A farewell to McLeod’s Daughters was held at Princess Park and raise money for the Gawler Health Foundation.

Aaron Jeffery chose to live in Gawler and bought a house in Cowan St, which he tastefully restored – it is located in the Gawler Heritage Area. Simone Jade McKinnon also lived in Gawler. The production office was on Murray Street/ Union St cnr and Wednesday night production meetings were held in the upstairs dining room of Café Nova. Crossing lights were set up by the railway on a railway line on John Schultz property at Sandy Creek for filming and then removed after. (10 photos from John including a photo of Dwan Schultze with actor John Jarrod (Terry).

During filming Stevie(Simone Jade McKinnon) wedding dress (beautiful purple and white dress) got caught in the wind as they were riding and it spooked her horse, she went flying and grazed her back, the dress was raced off to the drycleaners – it was at the drycleaners quicker than Simone made it to the hospital. As a thankyou the wedding dress was gifted to Gawler drycleaners and is currently on loan and on display at the Gawler Visitor Information Centre.

As Stevie and Kate were both short compared to Alex and Dave – often they would dig trenches for them to walk in next to them – to improve the close up shots.

Enlightened Magazine from Tony Piccolo with article about the end of McLeods and also the speech Tony Piccolo gave to Parliament as McLeod’s Daughters finished up.

Thank you to Marie Kibble for the photos and article. 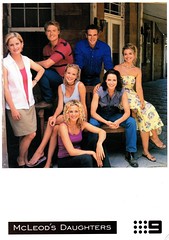 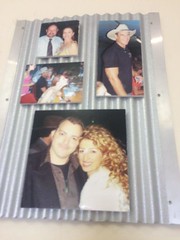 Do you remember McLeods Daughters TV Series ? Then Join up and add your memory here.