Please click here for photos of Meals on Wheels in Gawler.

Miss Doris Taylor, instigator of the Meals on Wheels Kitchen Scheme failed to get Gawler Council approval to initiate a kitchen in Gawler in the early 1960’s.

With the aid of the Gawler Rotary Club, which she had addressed previously on the value of such a facility, in November 1963 she attended a Gawler meeting in the Tennis Club Rooms.

Mr. J.S. Clark (later the Member for Gawler) chaired the meeting, which included the Mayor, and members of the Churches and Rotary. Dr BC. Eastick was elected Chairman of a Committee to advance the project. (Refer Bunyip “50 years ago” of 18th December 2013.)

The then Secretary of the city-based organisation Colonel H. C. Frith, addressed Gawler Council on 20th January 1964 and, as a result, Council agreed to make Council land available, adjacent to the North Para River, for erection of the Gawler kitchen. The Council also provided 500 pounds towards the cost of the building, with the District Council of Munno Para providing 200 pounds and the Gawler Rotary Club 100 pounds. Including those allocations, a total of 923 pounds 14 shillings and 3 pence was donated by the community.

The Kitchen was opened on Saturday 4th July 1964 in the presence of invited guests and the community by Sir Roland Jacobs (the Senior Vice- President and President-elect of Meals on Wheels). Following the opening, a buffet luncheon was held in the then RSL Hall on Cowan Street. (For the opening, refer to Bunyip of 9th July 1964.) A photograph of Miss Taylor appeared in the Advertiser of 21st January 1995 where she was described as one of the State’s 10 greats.

In the Bunyip of 24th May 2000, a photograph appeared of the then State Governor Sir Eric Neale serving up the State’s 30 millionth meal by Meals on Wheels to Gawler East resident Mr Lance Plumber. The local Kitchen Supervisor Mrs Pam Edwards was in the photograph. The original Chairman, Bruce Eastick, also attended.

The Bunyip of 14th May 2014 ran a story with a picture for Gawler’s 50th year of service to the community and on 13th August 2014, the Bunyip, under the title of “Gawler NowandThen”, showed a picture of Miss Taylor in the presence of the then Mayor Mr. Gil Harnet and Mr Bob Lally and Mrs Ivy Lally. A small article in the same edition advised that on August 4th a Commemorative Dinner had been held to acknowledge the 50 years of service.

On 26th June 2003, in an article by Rex Jory, the Advertiser wrote up the story of the 34th Million meal and the value of Meals on Wheels in South Australia.

“50 years ago” in the Bunyip of 9th July 2014 appears a record of the 50th Anniversary and the Bunyip of 20th August 2014 has a photograph and article reflecting on the 50 year Commemorative Dinner. 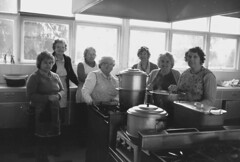 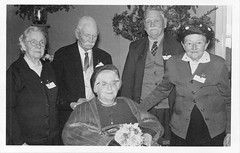 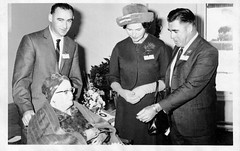 Memories of Meals on Wheels

Do you remember Meals on Wheels ? Then Join up and add your memory here.