The stone building which is part of today’s fodder store, was built in 1872 by James Dawson. Located on a parcel of six allotments of land bought from George Vosper Bassett for 60 pounds in 1865, of which 3 allotments were situated on the Eastern side of 23rd Street (then named Coulls Street). This area named Bassett Town was situated adjacent to the railway, a vital link to Adelaide and the Port. Gawler Station was the railhead and transport hub of the area providing the only means of export for local industries. James Dawson had a background as a seed merchant in Scotland and came to Australia seeking a climate more suitable to his health. He had friends in Gawler – the Fotheringhams. He tried sinking a well for a mill at Kapunda but found it unsuitable and then took a four year lease on a mill at Stockwell.

He saw advantages in the growth of Gawler, and also in owning land and a storage facility adjacent to the railway. Therefore he built the ‘grain store’, described as, ‘a single-storey building with basement constructed of bluestone with brick quoins and a corrugated iron roof’. This stone building remains and is the focal point of the fodder store today. James Dawson conducted his business from offices at the bottom of Carlton Road in Murray Street and three years after building the grain store, he built Albion Mill at the top of Murray Street at Cowan Street.

James Dawson died on 14th January 1882 and the grain store was willed to his business partner George Hilfers (accountant) and also James Deland (architect) and John Murray (stockholder). The three sold the grain store and land to Alfred Jones of Port Adelaide in June 1882 for the price of 625 pounds.

Alfred Jones didn’t hold the property for long, selling it for a 15 pound profit in December 1882 to John Britten Jones (possibly a relative) and Phillip Henry Burden, chaff merchants of Adelaide. This was to be the main use of this building over the years.

To this day the building is referred to as ‘the chaff shed’. The building was useful for this purpose as it consisted of a basement area for storage and large doorways to facilitate loading and unloading. The doors set high into the Eastern wall (roadside), were useful for tossing sheaves from loaded drays and (later) trucks. On the Western side there were steps leading down into the basement and a verandah area above it with a doorway into the ground floor. There were railway lines along this side of the building providing another way to transport goods to and from the premises.

Over the next 40 years, ownership changed 5 times but the building was predominately used for chaff/produce purposes. The chaff/ produce industry being a volatile one depending on climatic circumstances and the current economy. In 1909 the building was used as a factory for a short time, manufacturing thousands of medicine bottles. The start of WW1 saw the building adapted to army use. With troops camped at the nearby racecourse, it was useful for storage and as a meeting place for training purposes. In July 1923, Adelaide Milk Supply Co-Operative Limited (AMSCOL) bought the property from Robert Thomas Burford (part owner William Albert Clutterbuck had died the previous year).

AMSCOL were in their second year of operation and had plans to fit out the building with refrigeration machinery as a depot. The building was mostly left empty and derelict throughout the AMSCOL ownership, perhaps economically viable road transport from Adelaide and the on-set of the depression were factors.

During WW2, Bill James of 21st Street ran a gymnasium for local boys in the town. The boys referred to the building as ‘the scout hall’ and it contained rings, bars, and gymnasium equipment. The boys were also expected to run laps of the race-course but often took the opportunity to cut across! One of the local football clubs may have used the building around this time also. Locals would also keep their cows and horses in the lean-to shed at the northern end.

Berthold August Modra came to Gawler in 1946. He had been carting hay to a chaff mill at Magil and saw the opportunity to do similar in Gawler. He rented the building from Mr Lacey, who at the time was leasing the land from AMSCOL to keep his cows. The stone building was in a bad state of repair – it had been burnt out and the mortar between the stonework was eaten out by rats.

Bert set up the chaff mill, buying hay from local farmers and also dealing in bran, pollard and wheat. In October 1949 the 3 allotments on which the store stood were split from the title and sold by AMSCOL to Berthold Modra. Being near the railway in those days, there was plenty of action as the railway was still a transport hub. Daily trains would deliver parcels to the nearby goods shed and when the circus came to town, it came on a train. The circus people would stay in the carriages parked in the nearby rail-yards with the circus animals. The men working at Modra’s chaff mill remember an elephant escaping and going on a rampage through the shed and local veggie gardens. The elephant broke open a number of bags and Modra’s received complimentary tickets to the circus as compensation.

In November 1974, Bert’s sons John and Peter took over ownership of the chaff mill and Peter set about building it into a retail fodder store. Improvements included, a large shed built onto to the Southern end of the stone building, a toilet and an office.

Modra’s sold to Ron and Ian Sanders and their wives, in 1979, it then became SANDERS BROS GRAIN & FODDER. They tried their hand at cutting some chaff with the machinery in the basement, but decided on buying it in from expert chaff cutters! The basement also held a grain crusher and an elevator was used to move bags of grain up to the shop at ground level. The first floor (which took up half the floor area) of the building became storage for bagged chaff. The remainder was filled with hay.

Ian and his wife Carleen sold their share to Ron and Alison Sanders in July 1984. During this time the Eastern wall which had been leaning dangerously inwards, was straightened. This involved inserting beams held by steel pins to brace the wall for a number of weeks until a concrete pillar was constructed as a permanent support. While a student, Matthew worked Saturdays in the store and after qualifying and working for a number of years as an electronic technician, he decided to return to the family business with wife Jane. Joining his parents in partnership in 1993, Matthew set about learning ‘the ropes’ and introducing some new ideas to a traditional business. Shortly after, Matthew made the front page of ‘The Advertiser” when a freak whirlwind/mini tornado removed the roof from the stone building.

Matthew and Jane took over ownership in 2003 and completed restoration of the original building including stabilising the foundations and rebuilding stone work. During the process, the basement was filled with 420 ton of sand and a concrete floor poured, doorways were widened to enable forklift access, and the inside walls rendered and whitewashed. While maintaining the integrity of these historic beginnings, Matthew and Jane have expanded the shop to include staff facilities, a larger hayshed and are working on a new customer service area to provide a more enjoyable shopping experience.

Please click here to see more photos of this location. 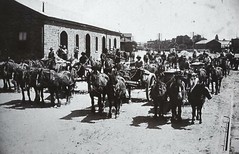 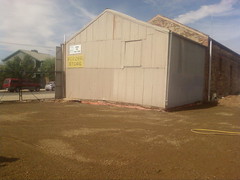 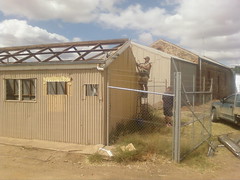 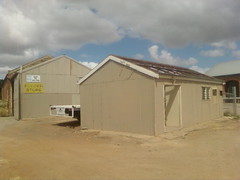 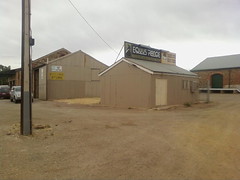 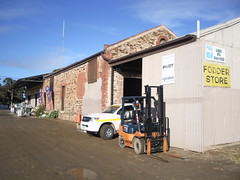 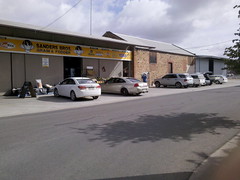 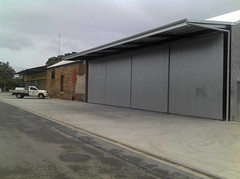 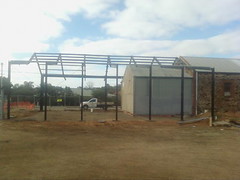 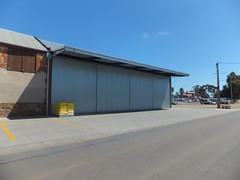 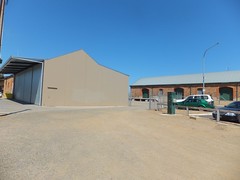 Do you remember Sanders Bros Grain & Fodder ? Then Join up and add your memory here.