Gawler Historical Rates Database show that "in 1868, William Faulkner Wincey owned and occupied a residence in the current location of Tortola House, plus land and gardens in the surrounding area".

Wincey was Mayor of Gawler in 1873 and 1874 and was a successful businessman. Around 1875, he built the two-storey section which adjoins the cottage he purchased in 1867.

The architecture is Venetian Gothic Revival with French Byzantine influences. The bricks for the front of the house were imported from Florence in Italy. The iron lacework to the front fence was added by Alfred May, when he occupied the premises at the turn of the century. The lacework was manufactured in the May Brothers Foundry at Gawler West.

The building was purchased for 1000 pounds in 1912 by the Tod Street Methodist Church for use as a Manse. It continued to be used as a Manse until at least 1963 when the Rev. Patrick lived there.

GAWLER’S FIRST WESLEYAN CHURCH (1850) click here to read a transcript of an article written in 1976 describing the construction of Tortola House. 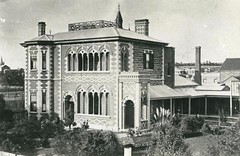 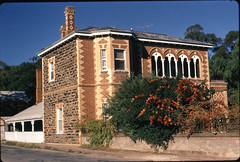 Do you remember Tortola House Tod Street ? Then Join up and add your memory here.