On 1 September 1910, the first Wattle Day was celebrated in Sydney, Adelaide and Melbourne. The aim of the League was to have the wattle accepted throughout Australia as the nation’s native flower and to be viewed as a symbol of ‘home, country, kindred, sunshine and love - every instinct that the heart most deeply enshrines’. (Sydney Morning Herald, September 1, 1910)

After World War I, the Wattle Day League established a wattle Memorial Grove to fallen soldiers within the grounds of Gawler Oval. When the trees failed to thrive, the Grove was moved to the old cemetery. As the Wattle Day League went into decline, [wound up on 6th May, 1924] the garden began to revert to wilderness until the RSL assumed responsibility for maintenance.

A boxthorn hedge which had been planted on the boundaries of the cemetery in 1892, was removed from two sides. A cyclone fence was erected, neglected tombstones were recovered and repaired and placed in a row in the remaining recognisable portion of the (Pioneer Park) Cemetery. [Many of these tombstones were later transferred to the Willaston Cemetery where they have been positioned (on the flat) on each side of the entrance to the Willaston Cemetery.]

Click here to read Memories of Gawler 1923+ by Colin Hillier re Wattle Day on page 42. https://drive.google.com/open?id=1t46sIGz7_J3T34GOYtfOLIj27BDiXAxy 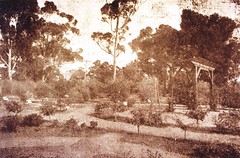 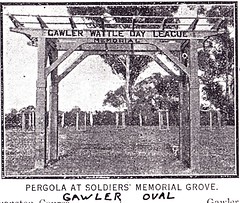 Do you remember Wattle Day League ? Then Join up and add your memory here.