Jakob Wintulich was born in 1875. His parents died when he was eight years old and he was subsequently brought up by his Uncle, a Professor of Medicine in Vienna. In his youth, he served a full apprenticeship as a smallgoods man, however his Uncle wanted him to become a doctor and he spent two years training at medical school. Jakob was also obliged to do some years national service.

When his Uncle arranged for him to marry a "red headed socialite" Jakob left his Uncle and gained a job in a smallgoods factory where a cut in his arm became infected. When doctors wanted to amputate his arm, Jakob returned to his Uncle who saved it. But Jakob was soon off again, this time for a working holiday around Europe.

After seeing most of Europe Jakob Wintulich stowed away on a sailing ship. Two days out from port the need for food caused his discovery. Jakob was given the option of being thrown overboard “to walk home” or work his passage, so he signed on as ships cook. The Captain was more than pleased with his new recruit and kept him as a permanent member of his crew. Jakob kept animals on board the ship and slaughtered them while at sea. He also made various smallgoods thus giving the Captain and crew a variety of meats not normally available at sea.

After two years at sea he jumped ship at Port Pirie, South Australia, leaving all his money and possessions including his pipe and tobacco on board. Jakob had told the Captain he was sick and was going to see a doctor. He found refuge with a farmer who he later discovered was a good friend of the Captain. When the Captain visited the farmer Jakob hid in the cellar behind a wine cask and listened to the conversation about the missing ships cook above him.

With his ship had safely sailed he made his way down to Adelaide where he found accommodation in Whitmore Square. Here, with the aid of the landlady's copper and a hand mincer, he started producing smallgoods and hawked them around the city in a basket. He soon had enough money to buy a bicycle on which he headed toward the German settlement of Tanunda.

At Gawler he made a sudden unscheduled stop when his front wheel became jammed in the tram lines for the old horse tram throwing him from his bike. He arrived at Tanunda in the early 1900's and began working for a local butcher, Mr. Jack Schultz.

In 1909 he started in business by himself as a family butcher smallgoods man. He operated from a smallgoods workshop and slaughter yard with a butcher’s cart, serving Tanunda and the surrounding district. Jakob Wintulich displayed his goods at most of the country shows as well as the Royal Adelaide Show, gaining many prizes for many of the large variety of smallgoods he manufactured.

On June 8th. 1910 he married Clara. Apart from making smallgoods, on their Hallet Valley property, Jakob and Clara also grew grapes which they sold to the wineries. They also catered for Vintage pay day at Seppelts and later at Gramps Orlando wineries. These were the days when at the completion of the vintage the growers all came to the winery where their accounts were settled, followed by appropriate celebrations, eating, drinking and making merry. These informal occasions were the forerunners to the Barossa Valley Vintage Festival.

While at Tanunda, Jakob taught many people the art of smallgoods making, at times travelling to neighbouring towns.

In November, 1924, Jakob sold up at Tanunda and moved to Gawler South, the site of the present factory and lived in the same house later to be occupied by his son, Frank, and currently his grandson, John. In 1925 he re-commenced making smallgoods and sold them in a shop in Murray Street Gawler, alongside the Old Spot Hotel. After about two years he closed the shop and distributed his goods on a wholesale basis to shops mainly in Adelaide.

In 1942 his son Frank took over the business and seeing a future in metwurst decided to concentrate on this product exclusively. Until 1948 all production had taken place in a 17sq metre workshop with a curing cellar beneath and an external smokehouse. In 1948 a new 80sq metre factory of Snowcrete block was built with an abutting smokehouse. In 1956 the original factory was demolished to make way for 80sq metres of garages, workshop and storeroom.

Frank's eldest son John joined the business in 1962 immediately after leaving school to become the third generation in the business. A fire in the smokehouse in 1965 saw it replaced with three pit type smokehouses, storerooms and amenities totalling 50sq metres. John Wintulich became manager of the business in 1967, a position he would hold until 1995. By 1968 public demand for Wintulichs Metwurst made it necessary to substantially increase the size of the factory, and so planning began. The expansion was completed in 1970 making a total of 480sq metres of export standard factory.

In 1972 Frank's youngest son Robert joined the business and in 1973 planning on yet another extension commenced. This extension was not completed until mid 1977. During this time, the Company was forced to rent a depot in Adelaide, to enable it to cope with the increased sales volume. The factory then had 1800sq metres of floor space.

The Gawler factory called for a further 600sq metres of extensions which were completed in 1986. This included the building of three multi-purpose 10 cage smokehouses which were designed by John Wintulich, as were the friction smoke generators which were an improvement on a German designed unit. The smokehouses and the ancillary equipment such as smoke generators and refrigeration for cooling were all controlled by a computer system.

Mark Wintulich, John's second son, studied smallgoods making at Regency Park School of Food and Catering where he was awarded the coveted Devro Smallgoods Award for the Top Smallgoods Certificate Graduate. Mark commenced working for the Company in 1986 and was the Company's smallgoods maker and the fourth generation Wintulich in the Company until his death from cancer in 1997. John’s other two sons Peter and Darren also worked in the factory until they pursued their chosen careers. In 1988 Robert Wintulich left the Company.

The Company extended its range of metwurst and diversified into other products including a number of varieties of fresh sausage.

Processing equipment in the factory was acquired or upgraded as the need arose with some items having been designed or made by Wintulichs themselves. John Wintulich travelled to Germany on a number of occasions to select equipment and ingredients and to keep pace with changing technology.

Wintulichs operates one of the most modern, hygienic and efficient smallgoods factories in Australia. They were Commonwealth Department of Primary Industry registered for export, and operated under an Approved Quality Assurance programme with the above department. 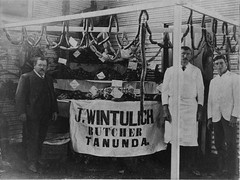 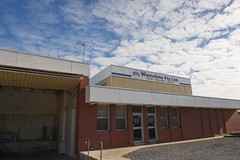 Do you remember Wintulichs Factory ? Then Join up and add your memory here.