This former Church Hall has a symmetrical frontage of tall proportions.

The walls are constructed of ruled rubble sandstone brought to course, with red brick quoins and dressings.

The roof form is a Dutch gable with louvered vents and is clad with corrugated metal.

The windows are timber-framed and double-hung sashes and the central entrance contains the original paired timber-framed doors with diagonal board cladding and fanlight.

Constructed in 1914, the Former Gawler South Anglican Church Hall at 50 Adelaide Road is associated with the ongoing activity of the nearby Gawler South Church of the Transfiguration. It is of value to the local Anglican and now broader community as a focus for community gathering and recreation for over 105 years.

The former Hall is a good, largely externally intact example of a modest Federation-era hall constructed of local stone and brickwork.

Gawler South was surveyed and subdivided for sale in 1858, following completion of the main railway to Gawler in 1857.

With the new railway terminus located in Bassett Town, to the south of the main Gawler township, Adelaide Road was anticipated as the principal link between the two.

The land for the Gawler South Hall, Allotments 77 and 78 of the Gawler South subdivision, was gifted to the Church of England Gawler Parish by Mrs Arabella Dawes, wife of prominent Gawler citizen and Surgeon, Richard St Mark Dawes. Arabella was described as a kind and charitable individual and was founding member and benefactress of the nearby Church of the Transfiguration on Adelaide Road.

It was decided by the vestry in October 1912 to build a hall and a building committee was formed.

The hall was to be named the Gawler South Church Hall and Mrs. Dawes was asked to lay the foundation stone. This she did on 2nd November 1913 and the hall was dedicated on 24th February, 1914. The Gawler Anglican Parish sold the Hall in 2002. 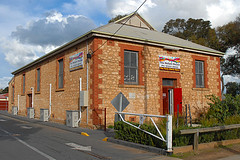 Do you remember Adelaide Road 50 ? Then Join up and add your memory here.