In 1890’s it was occupied by Mr. F. Fowler, cabinet maker and undertaker. In the 1930’s to early 1940’s it was a drapery store run by A. D. Jordan and Son. Gordon retired in 1972 and the business was purchased by the partnership of his brother Lionel Ames, Edward Manning and Kevin Howard, when the trading name of Ames Hardware was established on 1st July, 1972.


Lionel retired in 1974 and sold his share to the other two partners. In 1980, the business was relocated to No. 48 Murray Street, being a temporary move to enable the original building to be largely demolished, except for the front façade, to make way for a large, modern store. During the period of re-building the business grew and was not large enough for the full range of stock, so the store was worked from two locations.


Edward was the longest serving staff, having started his employment in 1959 when leaving school. The hardware store started off independently, but joined the Homestead group in the late 1970’s.

Please click here to see many more photos of Ames hardware over the years.

HISTORY OF AMES HARDWARE = compiled by Ed and Bev Manning and below is Ed's address to Gawler History Team's September 2020 meeting.

"This is a photo of early Murray Street, Gawler, South Australia. The now Kingsford Hotel is showing on the left of 34 – 36 , which is where the business of Ames Hardware traded. The Clock Tower – Old Post Office is shown opposite.

In the 1890’s the site of 34-36 Murray Street was occupied by F. Fowler, cabinetmaker and undertaker. In the 1930’s to early 1940’s it was a drapery store run by A.D. Jordan & Son, also at some stage a butcher shop and sweet store. We believe a brine tank may still remain there today under the TAB.

Gordon Ames opened up for business in early 1950’s. He had previously worked for William Dawkins & Co. In early 1960’s Gordon Ames bought stock from Graue’s, which was a leather and saddlery store, which was in Murray Street next door to the Prince Albert Hotel, when they were closing down. That stock included an assortment of cut leather washers, which were left over from pump washers. They were kept in a tea chest at Ames Hardware and customers could pick out what they wanted. Ed still has some of these today.

Gordon, Lionel Ames (Gordon’s brother), and Edward Manning (who joined from leaving school in February , 1959), were the employees. Edward would do deliveries in a Chrysler Wayfarer Ute. Students would come in after school and on Saturday mornings for part time work. Brian Cornelius , who many would remember as the woodwork teacher at Gawler High School, worked on Saturday mornings. A uniform was a gray dust coat.

The store looked disorganised but those who worked there knew where things were kept. It was an experience to watch Saturday morning trade. It was very busy. Closing time was 11.30 am on Saturday and opening again at 9 am Monday. Years ago when we would knock off on Saturday mornings, we would shut the back gate and go home for the weekend. Some times there would be 10,000 pounds worth of goods and materials left outside. Quite often when we opened up on Monday morning there would be a note stuck under the door from people (ie plumbers etc) who had come in over the weekend. The note would ask us to add the items they had taken to be put on their account. Now look at it, we need a two metre cyclone fence and are lucky if that doesn’t still allow goods to be stolen.

Customers included trades people who were very loyal to the store. We would help them out,sometimes after hours or an early morning start. There were some customer characters. Not sure how it would go now, but one lady would double rank in Murray Street, walk in to be served and say “they can wait”. Another gentleman wanting goods loaded into his car boot had a dead sheep in his ute with a very strong smell. Goods that would be unable to be sold today are mineral turps, kerosene, and metho that would be put into the customers own containers. Cold tar was sold out of a 44 gallon drum. If the weather was warm it would run freely. Blacksmiths charcoal was sold for anybody who had forge. For Scythe handles and blades, horse shoes (in different ponies and draught horses, with appropriate horse nails. Also saddles that were made locally. Cultivator shears, baling twine, fence wire and barbed wire. A cabinet scraper that was a common use in carpentry was sold.

Delivery of stock for the store was unloaded by hand, including cement, (ten ton at a time), piping, fencing materials, fertilizers, James Hardie products etc. The famous fig tree which has possibly a few offspring around Gawler as requests were made for cuttings, was in the back yard. Bookkeeping in 1974 was so very different. All sales were recorded in a day book before being handwritten to an account. Office employees were Mrs Parham, Mrs Sneesby and Beverley Manning. No tills; all transactions in drawers. A challenge for the office staff was when they were unable to spell a customers name, they had ‘nick-names'. The store ran independently until in March 1971 the store took on the Homestead franchise, which was run through Colton, Palmer and Preston.

Gordon Ames retired in 1972 and the business was purchased by the partnership of his brother Lionel, Edward Manning and Kevin Howard, when the trading name of AMES HARDWARE PTY. LTD. was established on 1st July, 1972. Lionel retired in 1974 and sold his share to the other partners of Kevin and Cath Howard and Edward and Beverley Manning.

Ordering of stock for specials for promotions e.g. Easter and Christmas, was done by an order form by post. We traded in an old fashioned style. Everything was physically handled by assistants.There was stuff jammed in everywhere, and a ladder in every room as the store has been a home, plus a few lean-to sheds. We had one important rule, if you found something in one spot, that was where it went back to. If you shifted it you wouldn’t find it. Kevin said one of his first jobs was to tidy the screws and he re-arranged them and got into terrible trouble.

The first plan was to re-build the premises. In June 1980, 48 Murray Street and the adjoining yard became available for leasing and after discussion it was decided to move in there whilst the site at 34-36 Murray Street was being re-built. Business increased rapidly and by the time the new building was complete it was impossible to put everything back into one building, so we decided to split the operation. We created a trade type centre and general hardware.

48 Murray Street was previously occupied by the former John Doran Motors show room, and before that Quarton, Wehr and Starling The new store was built by Gawler Carpenters & Joiners - (Harry Brown), which took 2 ½ years to complete. The moving of stock from 34-36 to 48 Murray Street was a major planning and moving operation, as was moving back to the new store. All staff members and family were helping over a few weekends. Staff were amazing with the assistance they gave and working under difficult conditions.

In 1993 the business changed banners to become HOME HARDWARE under the John Danks & Son group.The ‘old Ames clubs. The Grand Opening under the new banner was on Saturday, 27th November, 1993. It was opened by the Mayor of Gawler, Dr. Bruce Eastick. Home mascots Rusty and Sandy (dogs) were in attendance. (The dogs would come to the Christmas Fair when it was held in Murray Street). Also present at the opening was Al (the Tool Man’s assistant) Borland as part of the Black & Decker promotion which attracted fans from the Home Improvement TV show. Over the years the paint companies had promotions , Taubmans paints was Carter Edwards singing ‘I did it my way’, British Paints had Rolf Harris doing his paintings with a six inch brush, Walpamur had Wally the monkey. As I have mentioned before the dogs Sandy & Rusty for Home Hardware and Dolly the giraffe for a radio station. Over the years Ames Hardware supported many football, tennis, golf and others. Local business people has a Derby night at the Paceway (trots) which staff attended.

Kevin and Edward were both Presidents of Gawler Lions Club.

In 1995 Ames Hardware won the Award for the Large Retail Section from the Gawler Rotary Club in quality of Service Awards to Citizens. Ian Sanders was President of Rotary in 1995.

In later years we did have burglaries. The call would come and Kevin would come from Evanston and Edward from Gawler East to meet the police. No entry was allowed until police arrived but in later years you were on your own. The hotel proprietor, Doug Lyons, foiled a few robberies when he heard a noise at the back of the shop, in Julian Tce., and in one case discovered wheelbarrows being thrown over the back fence. The last one before we closed, was the front glass panel broken and a chainsaw stolen, even though it was chained to a fixture. Broom and axe handles were in a tub by the back door. Not sure what help that would be. We had to wait until morning for the replacement glass company to take it in turns for back up. The chainsaw was found next morning at the back of the BP Service Station, in a sports bag with a change of jumper, ready to be picked up, police assumed at a later date. Another burglary was when brush cutters and a chainsaw from 48 Murray Street was found by police on the side of the road at Elizabeth, unharmed. It did make such a mess having to clean up splintered glass. Funny things that happened . A customer came and priced goods with our store but decided to purchase elsewhere because it was a bit cheaper but that store was going to charge a huge delivery fee, so could he please borrow our truck to collect his goods!! A common happening was a junior starting a job would be sent to the shop to purchase a hammer to knock the dents out of glass, which we charged them for and put on the docket, non refundable!! This prank did not work.

In 1998 the decision was made to shrink the business into one store and No. 48 was auctioned and sold to Mannix Airconditioning. It was later occupied by Gawler Fishing and Outdoors, and is currently occupied by the Vinnies Op shop.

On Saturday, 8th August, 1998, the gate was closed on the partnership, the business was sold and opened under new management on the Monday morning (Stratco). The property of 34-36 Murray Street was then sold to the Kingsford Hotel proprietors and is now the home of the TAB, Sports Bar and Pokies. This history has been compiled by Edward and Beverley Manning to the best of our memory and our time spent there. Unfortunately Kevin and Cath Howard are unable to be here with us tonight."

The Video of Ed's 2020 address on the history of Ames Hardware is seen below. 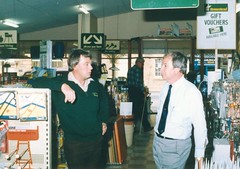 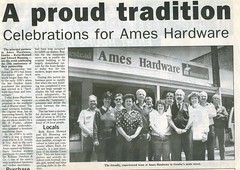 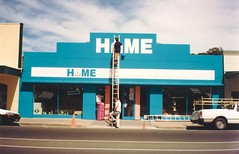 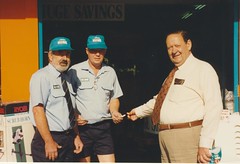 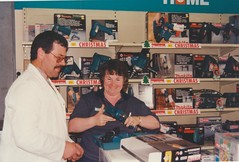 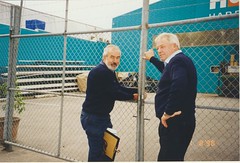 Do you remember Ames Hardware ? Then Join up and add your memory here.