E.H.Coombe "History of Gawler" p59 ..."On September 8, 1868...Mr.J.B.Austin wrote, as Hon. Secretary of the Ratepayers' Committee, a letter addressed to John Rudall Esq. Town Clerk of Gawler, stating that Councillors Dean, Jones, Popham, Howe and Swann had declined to appoint any time for receiving the requisitions from the ratepayers calling them to resign...."

Amongst the interesting and useful lives recently closed I noticed those of the late Mr J. B. Austin and Mr S. L. Moody. John Baptist Austin was at one time connected with Gawler and the Gawler press, which gives him a special claim on the attention of the Gawler people.

Up till a few months ago there appeared every prospect of his continuing amongst us for many years. Then came a small trouble, indigestion, which, it was supposed, the dentist might be the means of removing. But neither dentist nor physician could shift it, and the indigestion was associated with acute pain, meanwhile, the patient wasted and weakened. Still, abrupt as was the termination, for he was practically in harness till the last week or so, he had nearly fulfilled the allotted three score years and ten.

The chief work of his later life was to promote the mining resources of the colony. He travelled much, wrote much, and brought to bear a long experience for the purpose of inducing South Australians to develop the industry within their own borders. Fortune did not smile upon him, but he never lost heart. I recollect him years ago when he was a member of the Advertiser staff, and a very entertaining companion he was, ready with recitation and apt in anecdote. His sister, who married Mr. A. L. Elder, was accounted the most beautiful woman of South Australia.

Mr. J. B. Austin started the first masonic paper in the colony. 2 [Researched by Allen Tiller] 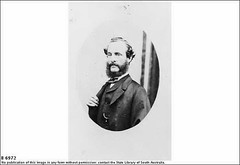 Do you remember Austin John Baptist ? Then Join up and add your memory here.