Butchers in Gawler and Willaston


Edwin and his brother Henry established a butcher business in the main street of Willaston in 1874, having helped run their father’s business in Roseworthy for many years.1 Their shop was near the original Willaston Hotel.

In 1878 the business was leased to Hodgson and Clement.2 Hodgson & Clements ran the business until 1868 when E.Gartrell returned. In 1907 the Gartrell’s butchering establishment was regarded as the largest in the colony, with the shop, yards, stables and outhouses covering an acre of land. Not without issues, however. The Bunyip reported on the 16th January 1874 that at the Mudla Wirra South Council meeting, held on the 10th January – “H&E Gartrell, butchers, Willaston, to re requested to abate nuisance arising from the offensive smells from their yards”.


Gartrell was an entrepreneur of his time. With the Barossa Goldfields rush in 1887, Gartrell and Hodgson opened a ‘shop’ at the goldfields (in the Cockatoo Valley area). It consisted of an overhanging branch from which two sheep, newly slaughtered, were suspended. It was reported that the two did intend to erect a more business-like premises.


Mr. Spencer Turner opened his butcher shop in 1948 in the second shop alongside the Willaston Hotel (formerly the Victoria Hotel). He was known as “the friendly Willaston butcher”. He closed his shop on the 15th April 1992, having operated his business for over 43 years. Mr. Fred Brooks recollects that “the butcher shop contained an enormous red-gum chopping block that had been worn down ten inches in nearly 44 years. To get the chopping block in and out the shop, a window had to be removed as the block was too big to manoeuvre through the door”. Turner used to do his slaughtering in Edmond Brothers Slaughter-House which was situated in the north end of Willaston.
Later, he used Hewett’s Slaughter House just east of Murray Road Willaston. This continued until 1981 when meat hygiene regulations altered, and it was required that all slaughtering was to be done in government-approved slaughter houses. Turner then had Mr. D. Stansborough do his slaughtering by the “27 mile train crossing.”


Between 1894 and 1920 Mr. Causby and his sons, would slaughter stock on the east side of Chamberlain Road, near the Willaston Cemetery. They never operated a butcher’s shop; however, the sons, Tom and Joe would deliver meat around Willaston and Gawler.


In 1896 Mr W.J. Selway began his butchering business; however, he didn’t have a shop for some twelve years. His first butcher shop was on the corner of Murray and High Street in Gawler. The slaughtering was done to the south of the shop. In 1932, his son, W.J. Selway Junior took over and opened a butcher shop in Murray Street, where the Bunyip Office is situated. During the Second World War, with the labour shortage, he closed his Murray Street shop and opened a butcher shop in Willaston. It was the third shop just south of the Willaston Hotel. He remained there until 1945. Mr Selway Junior’s slaughterhouse was situated on what is now known as Kelly Road. It was demolished in 1994.

The Butcher’s and Baker’s Picnics


Social gatherings were important in the growth and development of trades, and picnics were especially popular in Gawler, Willaston and other townships. The Butcher’s and Baker’s Picnics in the 1890s involved a whole family outing for the trades. The Bunyip on 23rd November 1894, recorded the Butchers and Bakers Picnic thus- “The procession was a very interesting one. Thirty-seven vehicles of all descriptions containing 236 occupants and five horsemen made up the procession, which as it passed along Murray Street shortly after 9 a.m., was headed by Rigg’s brass band”. They made their way to the property of Mr Lawes at Sandy Creek. There was a cricket match, athletic events for adults and children, tug-of-war and egg and spoon races. 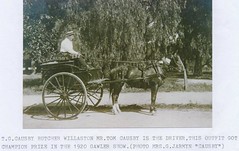 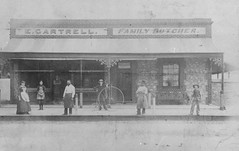 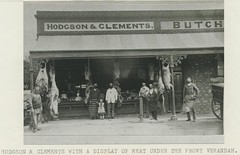 Memories of Butchers in Gawler and Willaston

Do you remember Butchers in Gawler and Willaston ? Then Join up and add your memory here.