Gerald was born in the Hutchinson Hospital in Gawler on 17th March 1939. His parents were Laurence Carmody, a carpenter of Willaston, and Gladys Olive Carmody (nee Window) of Loos.

His great-grandfather, Patrick Joseph Carmody, arrived in South Australia in the “Northumberland” in 1856, and settled in Gawler. He married Mary Anne McKeown, and they shifted to Burra and later Kapunda. Patrick was a builder by trade, but had a number of other occupations, including Police Officer [dismissed for being asleep on duty].

Catherine purchased a house at 8 Edward Street Willaston, c1917, in an area officially designated as Waltham Abbey. A stone room used as a bedroom is still in existence (a true heritage building!).

Laurence married Gladys Window in 1937 in St Francis Xavier Cathedral, Adelaide. They had two sons; Gerald and Anthony Dennis [1950-2013]. For 11 years Gerald and his parents lived in a three roomed “shack” at 8 Edward Street, Willaston. No electricity, an outside tap for water, a separate galvanised iron wash house, a detached bathroom with a “chip” water heater, and an outside bucket dunny down the back yard. There was no motor car or telephone.

In 1950, Laurence slowly built a brand new house at 29 Redbanks Road with all modern conveniences. Tony was born the same year. (Unbelievably, this perfectly good house was totally demolished in 2015 and another house erected.)

For 9 years, Gerald attended the Good Samaritan Catholic School [6 years Primary and 3 years High School] at Porter Street on Church Hill. During year 9, Gerald was seriously burnt about the body from a fire during a chemistry lesson at the School. He still bears the scars. At the age of 14, Gerald left school and started work at the Lands Titles Office in Adelaide, where he remained for 5 years. He then obtained a position with the Corporation of the Town of Gawler as assistant to the Town Clerk [Mr A.R. Warhurst] and then as an Inspector for 8 years. In 1966 Gerald transferred to the District Council of Mallala where he remained for 18 years. He resigned in 1984.

In 1958, Gerald married Lynette Rae Guerin, the eldest daughter of the Roseworthy Railway Station Master. During the next 14 years, they had 6 daughters and 4 sons. They lived in a SA Housing Trust home at 1 Elgin Avenue Evanston for 6 years. They then purchased premises at 35-37 Redbanks Road Willaston where they resided for 25 years, and then they bought a house at 15 Holness Avenue Gawler East where they lived for 6 years. In 1997 they shifted to a house at 17 Strangways Avenue Hayborough [Victor Harbor] and later at 46 Sinclair Street Hayborough. In 2011 Gerald and Lynette took up residence in the Vines Retirement Village at Nuriootpa.

In 2015, Gerald and Lynette celebrated their 57th wedding anniversary; having 21 grandchildren and 14 great grandchildren. In 1976, together with a family friend Cecil Hampel, they purchased an old school house on 2 acres at Waterloo, north of Kapunda, and used it as a holiday home for 8 years. Having retired from full time employment in 1984, Gerald and Lynette established and operated for 8 years a small business registered as “Waltham Leisure”, involving on-site caravan hire at various locations throughout South Australia, table-tennis table manufacture and hand carved timber sporting trophies.

In recent years Gerald has devoted much time and effort to the writing of short stories, family anecdotes and tales. In 2015 he published a 312 page book titled “There’s the Rub”; containing 44 short stories with surprise endings.

We are saddened to learn that Gerald passed away 15th June 2019. 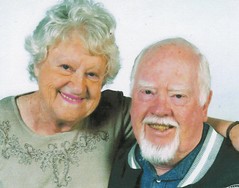 Do you remember Carmody Gerald Laurence ? Then Join up and add your memory here.