Please click here for photos of the Abbey on 8 Cowan Street; originally constructed as St. Andrew's Presbyterian Church in 1856. The spire was removed c1895 owing to defects in the foundations.

Derek Whitelock's book "Gawler" p211 says "Earlier, Presbyterians had met in Fotheringham's malthouse, then in a pine hut. This denomination was split into the established Kirk, or Church of Scotland, and the free Kirk, and most of the Gawler flock were of the latter persuasion. This led to difficulties over the church site. The land set aside [Light Square] for a Presbyterian church, manse and school was specifically for the established Kirk. Eventually, land nearby was given by John Auld, and St. Andrew's Presbyterian Church was built on it, designed and constructed by Messrs. English and Brown, of Adelaide, in 1856.".

George E.Loyau "The Gawler Handbook" pages 129 and 130... "the present {Presbyterian] Church building was erected [in 1855] in Cowan Street at a cost of 1,400 pounds, on a piece of land presented by the late Mr John Auld." "The congregation was formed in the beginning of the year 1854, under the pastoral charge of the Rev.J.S.Moir; the congregation at first worshipping in what was known as the old schoolroom, on Scheibener-terrace; this building.....has disappeared."

"The Church numbers about 120 members and seatholders; the Sunday School has 80 scholars and 10 teachers, Mr.W.F.Loutit being Superintendent."

Dekek Whitelock p211 continues..."800 pounds were paid forthwith for there were many Scottish farmers and businessmen in colonial Gawler. James Martin, who also helped the Anglicans and Methodists, was a benefactor. The 1860's and 1870's, when the Rev. James Gordon was minister, were what Coombe calls "the days of prime" for St. Andrews. Coombe said "Congregations were crowded, sittings were scarcely to be had, and the debt on the church of 600 pounds was wiped off in little more than a year....On entering, one was presented with a paper bag - "poke" it was called - containing various eatables which were his portion...People crowded to these meeting in hundreds...."

Whitelock p211 continues..."This was originally topped by a tall spire, a local landmark, which had to be taken down in the 1890's because of defective foundations. The church was built of stone from a quarry in John Haldane's property on Gawler Plains. ....When the local Presbyterians amalgamated with the Congregationalists in a Uniting Parish in 1967, it was sold." 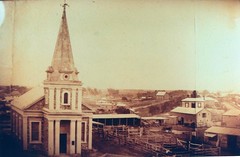 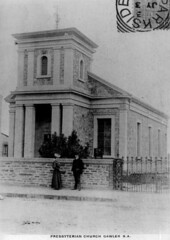 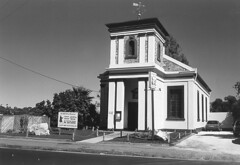 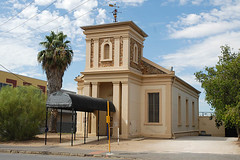 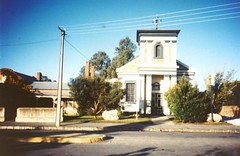 Memories of Cowan Street 8 - The Abbey

Do you remember Cowan Street 8 - The Abbey ? Then Join up and add your memory here.