This single-storey, double-fronted combined store and residence is a single-storey doublefronted building of mid-Victorian commercial style. The hipped roof is concealed by the parapeted walls which are detailed with shaped brick cornice mould (overpainted). The timber-framed, multipaned shop windows feature detailed timber stall boards and heads. The main shop entry is a pair double timber panelled French doors and entry to the dwelling is a single timber panelled door. The chimney is overpainted brick with corbelled cap. The concave verandah is clad with overpainted corrugated galvanised iron and supported on turned timber posts.

Likely established by 1868, the former general store and combined residence at 19 Eighteenth Street, Gawler West, demonstrates the establishment of a combined store and residence to service the burgeoning industrial and residential growth of the Gawler West and Bassett Town areas following their establishment in 1857. Initially established as a butcher’s shop and then operated as a grocer’s general store, the store was well placed on a principal thoroughfare to ensure commercial success, providing a key service to the local community.

The building is a fine and substantially externally intact example of a mid-Victorian era store, including intact shopfront and dual entrances which clearly demonstrate its original use.

A portion of Section 2, Hundred of Mudla Wirra was laid out as part of Gawler West in 1857. The Township of Gawler West was initiated to take advantage of the railway link to Adelaide completed and opened for passenger traffic on 5 October 1857. The original subdivision plan indicates that the property address was originally ‘Blanche Terrace’, later renamed ‘18 the Street’. Blanche Terrace soon became a key connector between the properties located west of the railway station, the railway station itself and the Adelaide Road into Gawler Town proper. This became further heightened with the activity generated by the establishment of Duffield’s Victoria Mill to the west in 1867, May Bros Foundry, opposite, in 1885, the Britannia Foundry to the west of the station in 1 887, and Gilbert’s Chaff Mill in 1883.

It is unclear who first owned the subject land between 1857 and 1873, however at that time Allotment 18 was transferred to Emma Bond, Widow, of Gawler South. It is likely the property had been passed to her following the death of her husband, Benjamin Bond, Butcher of Gawler West. Given the commercial nature of the building, it is possible that the Bonds operated a butcher’s shop from the retail portion of the building; an 1868 Directory supports this with the first listing for ‘Benjamin Bond, Butcher, Bassett Town’. At some stage prior to 1 896, Emma’s three children – Emelia, Emily Louisa and Arthur Benjamin - were named on the certificate of title as being entitled to the property. When Emma Bond died in 1911 the title passed to her two daughters; Benjamin Bond, her son, had died in 1896. The sisters then leased the property to George Humphry for a period of five years from October 1911. Following the death of Emelia Bond in 1920, Emily (by then married to Charles Fuller Johncock) was the sole surviving sibling. Emily Johncock transferred the property to William Francis Whinnen, Grocer, and Phyllis May Whinnen, Spinster in 1946. 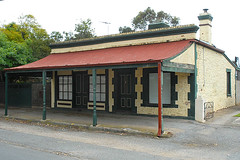 Do you remember Eighteenth Street 19 ? Then Join up and add your memory here.