This single-storey, double-fronted symmetrical late-Victorian cottage is constructed of coursed tooled bluestone with a tuck-pointed finish and overpainted brick quoins and dressings. The hipped roof is clad with corrugated metal, featuring overpainted brick chimneys with chamfered corners and moulded caps. Windows are timber-framed, doublehung sashes to either side of the central timber panelled door with leadlight glazing to sidelights and fanlight. The bullnose verandah is clad with corrugated metal and is supported on square timber posts with cast-iron frieze and corner brackets. The frontage is defined by a non-original timber picket fence to the boundaries.

Likely constructed during the last quarter of the nineteenth century and then used from 1900 as an office for May Bros.’ Gawler Engineering Works, the cottage at 5 Eighteenth Street is associated with the huge increase and demand for residential development of the local area due to the establishment and success of local industries. It is also associated with one of Gawler’s largest industrial businesses of the late-nineteenth century for its use by May Bros Gawler Foundry. It demonstrates a phase of major increase in the iron manufacturing industry and employment in Gawler by Mays, whereby the demand to take up adjoining property around their foundry further west drove surrounding development. The former cottage is a good and largely intact example of a late-Victorian cottage of local stone and brick. As May Bros. office, the cottage is also associated with Frederick and Alfred May and their May Bros. Gawler Foundry.

A portion of Section 2, Hundred of Mudla Wirra was laid out as ‘Gawler West Extension’ in 1857. Eighteenth (Blanch) Street was at the southern boundary of the subdivision and the area formerly known as Bassett Town to the south was laid out shortly afterwards in response to the establishment of the Gawler Railway Station in 1857.

Development included a concentration of commercial and industrial premises located in proximity to the station. One of the most prominent businesses in the area was the May Brothers & Co. Limited Foundry and Engineering Works, established in 1885, and at its peak employing up to 300 staff. The choice of location was an obvious one – placed to take advantage of the transport of raw product inwards and manufactured goods outwards. It began with one building and a small number of men. This followed a split from James Martin’s business and initially focussed on manufacturer of agricultural implements and mining equipment. Within a very short period of time the business expanded on the basis of orders for smelting, crushing, pumping and winding plants. This represented a major increase in the iron manufacturing industry in Gawler by Mays and others. Adjoining land and residential properties were taken up for expansion of the plant and ancillary purposes; ultimately occupying Lots 8-14 in Eighteenth Street, Lots 19 and 20 in Nineteenth Street and Lots 11 and 12 in Twenty Third Street.

The original purchaser of the land is unknown and it has been suggested that the former dwelling was used by the May Brothers for administrative purpose, however in 1896 title to the subject Allotments 120 and 121 was held by James Matthews, Labourer of Gawler South. The property passed from James Matthews to Herbert Percival Collins Matthews, Engineer in 1935. The property does not appear to have been formerly leased during these ownerships, though may have done so prior to the Torrens Title system. The two lots were subdivided around 1971. 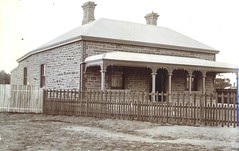 Do you remember Eighteenth Street 5 ? Then Join up and add your memory here.