This single-storey, double-fronted asymmetrical villa with projecting bay is constructed of random coursed sandstone with a tuck-pointed finish and rendered, vermiculated quoins and dressings. Side walls are of rubble sandstone and the hipped roof form with projecting hip is clad with corrugated metal. Windows are timber-framed double-hung sashes and the timber-framed door features sidelights and leadlight glazed fanlight. Chimneys are rendered with moulded caps. The bullnose verandah is clad with corrugated metal on circular castiron posts with cast-iron frieze panels, fringe and corner brackets. A low roughcast wall with overpainted brick capping and piers and cast-iron panels, is splayed to central steps with a wrought-iron gate, defining the front boundary.

The dwelling at 26 Eighth Street, Gawler South, demonstrates the marked increase in quality residential development in the immediate area being bolstered by Gawler’s prosperity and attracted by the establishment of local industry, specifically the adjoining business, D and RJ Fotheringham Cordial Factory. The fine and substantially intact late-Victorian era residence displays distinctive local materials and typology, complete with stone and cast iron front fence. The residence was constructed for prominent local businessman, David Fotheringham, director of the adjoining cordial factory.

David Fotheringham was born in Gawler in 1858, the son of Alexander Fotheringham and nephew of Gawler brewers James, Thomas and Robert Fotheringham. A Fotheringham family business, Gawler Brewery, had been established by James Fotheringham in 1846 and operated from a site in Julian Terrace, adjacent to the Bridge Street crossing of the Para River. James Fotheringham had been one of the twelve original Proprietors of the Gawler Special Survey of 1839 and had huge land and business interests in the district. Around 1878 David and his brother, Robert John Moir Fotheringham, developed a cordial and aerated water factory in Water Street, Goose Island, known as D and RJ Fotheringham Cordial Factory. The men had purchased Lot 2, the site of Roediger’s Flax Mills, located only 4 lots to the north east of the subject property; this placed David Fotheringham conveniently close to his business premises. David died in 1898 at the young age of forty and the business was sold in 1902. 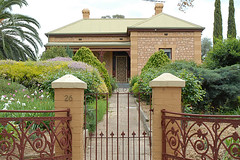 Do you remember Eighth Street 26 ? Then Join up and add your memory here.