This double-storey, double-fronted late-Victorian symmetrical cottage is elevated on a ridge, with a ground semi-basement level. It is constructed of overpainted dressed stone with rubble side walls and overpainted brick dressings. The hipped roof is clad with corrugated metal and features overpainted brick chimneys with dentilled caps. Windows are timberframed, double-hung sashes to either side of the central panelled timber door. The bullnose hip verandah is clad with corrugated metal supported on cast-iron trellis posts with cast-iron frieze and enclosed by a cast-iron balustrade. Rendered splayed entrance steps provide access to the verandah.

Likely constructed during the late nineteenth century, the cottage at 9 Eleventh Street demonstrates the influx of residential development of Gawler South following subdivision in 1858 and subsequent industrial and commercial development after the completion of the nearby Gawler Railway Station. It is a good and relatively externally intact example of a symmetrical cottage constructed of local materials including fine cast iron embellishment, designed over two levels to address its ridgetop location and site topography. The cottage is also associated with Michael Fitch, a chair of the Northern Settlement Party, sent in 1864 to survey and establish the recently annexed Northern Territory.

Section 3 of the Gawler Special Survey was originally granted to Henry Dundas Murray and E Moore in 1839. A portion of Section 3, Hundred of Mudla Wirra was laid out as ‘Gawler Town South’ in 1858. This followed completion of the main railway to Gawler and Station, located nearby to the west in 1857. According to the original plan of subdivision and Certificate of Title, Eighth Street was originally named ‘Moore Street’.

The first available certificate of title, dated 1 891, indicates that the subject land, Allotment 9, was part of a much larger holding of eight allotments (including Lots 6, 7, 8, 9, 26, 27, 28 and 29) all owned by Michael Edward Fitch, of Gawler, Letter Carrier. These extended between Eighth (Water) Street and Eleventh (Moore) streets. Prior to the transfer of the land, Fitch was a member (chair) of the inaugural survey team, the Northern Settlement Party, which was sent by the South Australian government in 1864 to establish the first permanent European settlement in the new Northern Territory. 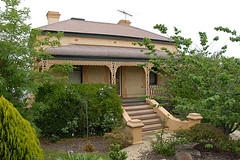 Do you remember Eleventh Street 9 ? Then Join up and add your memory here.