Legendary Gawler band who became infamous due to their over-the-top look sounds and live shows. John ‘The Beast’ who stood at almost two metres tall was the central focus of the band. John donned a stage costume that weighed up to 90kgs and was adorned with spikes, chains and horns. John also played a guitar fitted with car extractors.

The band released an EP

In 1986, tragedy struck when the bands' tour bus was involved in a crash. John suffered severe injuries which saw him spend 3 years in hospital recovering. The crash effectively ended the band.

The Zisimou brothers formed the band Blistered Palms in 2002.

John the Beast and Escape featured on many national TV shows, including Midday with Ray Martin. They appeared in various newspapers articles and are still referenced today in various publications.

Please <click here> to view photos and flyers of the band.

Currently, a film by Michael Krazz, called “Escape: The Great Unsigned” is in production, much of it filmed in Gawler at the Zisimou’s house, the former Good Samaritan Convent. Watch a preview by <clicking here>. Shorter preview <click here>.

[Researched and written by Allen Tiller]. 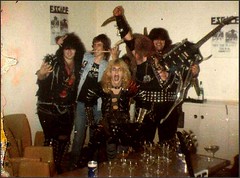 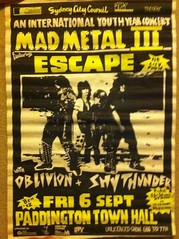 Do you remember Escape - Band ? Then Join up and add your memory here.