This single-storey, double-fronted Victorian cottage is constructed of red face brick to the façade, with rubble bluestone side walls. The transverse gable roof is clad with corrugated metal with parapeted side walls. Side walls are capped with corbelled brick and north wall is crowned with a chimney featuring corbelled brick cap to the north. The bullnose verandah is clad with corrugated metal and is supported on square timber posts with cast-iron corner brackets. A non-original brush fence defines the front boundary.

The cottage at 5 Fifteenth Street, Gawler West, is associated with the rapid and predominant pattern of development of Gawler West in the second half of the nineteenth century for modest accommodation and worker’s cottages following its initial subdivision in 1857; this was driven primarily by the establishment of the nearby Gawler Railway Station and associated industrial development. The cottage is a good and substantially externally intact example of a mid-Victorian era worker’s cottage constructed of local materials in a distinctive Gawler typology.

A portion of Section 2, Hundred of Mudla Wirra, originally granted to Henry Dundas Murray and EW Jerningham, was laid out as Gawler West in 1857. In October that year an advertisement appeared in the South Australian Register calling attention to proposed extensions of the Gawler Township from River Street to the South Para, to which Hanson Street would also be continued, ‘The extension will thus practically make one Township of Gawler West, Gawler Town and Willaston’. It stated that the survey would be commenced as soon as the line of the Kapunda Railway had been finally settled; and the new portion would extend from Gawler West and Gawler Town to the Railway Line. ‘Hanson Street’ was later changed to Fifteenth Street.

In 1903, the first available Certificate of Title for the property, Part Lots 60 and 61, indicates that Emma Rippin of Gawler West, Widow, held the property title. Emma’s late husband, Isaiah Rippin had arrived in Gawler in 1880 and had been an employee of the South Australia Railways Commission for that time, ultimately working as a goodshed foreman at the nearby Gawler Railway Station. Emma Rippon remained at their property in Fifteenth Street until her own death in 1938.

The date of construction is unknown. 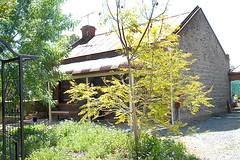 Do you remember Fifteenth Street 5 ? Then Join up and add your memory here.