For the first fifteen years of settlement, Gawler residents relied very largely on community or individual action to provide essential services for the population at large. The establishment in 1848 of a schoolhouse, in which both teaching and religious services were conducted, was the first effort at the creation of a public resource, most other community action being directed towards the improvement of transport and communications with Adelaide 78.

Within 20 years of settlement, the business of Gawler had extended sufficiently to require the SA Banking Company to open a branch office in town. The building, in the Italian style with a large portico, was opened in April 1857 at the Southern end of Murray Street.79

In 1866, a branch of the Bank of Adelaide (now the ANZ) opened in Gawler. In April 1892, the Bank of SA was taken over by the Union Bank of Australia and the existing bank began to trade under its new name. The National Bank of Australasia also opened a branch in a shop in 1859 until 1881 when its premises opposite the Town Hall was built80. By the turn of the 20th century there were five banks in the town: Bank of Adelaide; Commercial; National; Bank of South Australia and Savings’ Bank.

The creation of the Municipality of Gawler in 1857 signalled significant opportunity to create new public services. One of the first undertakings of the new Corporation was to petition the government in September 1858 for a grant of 1,000 pounds to repair Murray Street, on the basis that it was "the only highway for the produce of the mines, and the extensive agricultural country north and east of Gawler, in its transit to the capital has a greater extent of traffic over it than any other road in the Colony” 81

Drainage, the maintenance and upgrading of Murray Street and the undertaking of works to render the gradients along it more manageable were the principal considerations of the Corporation throughout the first fifteen years of its existence. Slate¬flagging foot paths were laid along Murray Street and a weekly scavenger's cart was instituted to remove refuse from business places and residences 82.

Early in 1868 there was held a public meeting to consider the formation of a gas company in Gawler. A prospectus for the Provincial Gas Co., to establish gas works in Gawler, Kapunda and Strathalbyn, was issued at the end of May and in July the Provincial Gas Co. gave notice of its intention to petition Parliament for a Bill to incorporate the company. This was assented to by Parliament on 30th January 1869. The Company set up offices initially in the Town Hall and its works were established in Seventh Street, Gawler South.

The gas lighting of premises of subscribers began late in 1869. The price of gas lighting limited the number of users for many years to largely public buildings, shops, offices and industry. A public meeting of ratepayers in November 1869 voted against the lighting of the town by gas and there was no introduction of street lighting until 1879 and then only following private donation of lamp pillars to the Corporation. The lighting of the town began with residents donating lamps at a cost of £12 each to the Corporation. These were erected in prominent places and lit from dusk until 11pm when they were extinguished. By limiting the hours of lighting and not lighting during periods of full moon, costs of running the public lighting system were kept to £2 per lamp per annum. One pillar still stands on the pavement outside the Institute.

In the early decades of the 20th century, electric lighting was introduced. The scheme was the undertaking of the Gawler Corporation itself, with the approval of rate payers, and was partly influenced by long dissatisfaction with the service provided and rates charged by the Gas Company.

Electric lighting of Gawler began in 1912 and, with special government authorisation to allow the Corporation to undertake operations beyond its boundaries, was extended to Gawler South in 1913 and Willaston

in 1918. Gas lighting had never been widely adopted in private homes in Gawler because of the high cost, but private homes quickly adopted electric lighting. The decision of the Gas Company to close its Gawler works in November 1917 thus inconvenienced mainly business and commercial premises who had not yet changed to electricity 83.

The Adelaide Electric Supply Company, which had taken over the supply of electricity to the Corporation in 1924, became the semi-governmental authority, E.T.S.A., and a large new substation was built on the historic site of the original public schoolhouse on Fotheringham Terrace. In 1978 more than 100 years after gas was first supplied to Gawler the S.A. Gas Company proposed the extension of its services to Gawler with Gawler West and Evanston the first areas to be supplied.

For the first 40 years of settlement, residents water needs were supplied from tanks and private wells with a reticulated water supply not available until the Gawler Waterworks were undertaken by the Hydraulic Engineers Department in 1883. An engine and boiler house were erected on the site of the well and delivered water to a reservoir built on Calton Hill, from which water entered the mains yielding 6000 gallons/hour. The permanent network system permitted street watering for the first time thus reducing dust. A small water scheme was also completed at Greenock Creek in August 1898 and connected to water tanks at the Gawler and Roseworthy railway stations.

Public agitation for a more permanent water supply in 1889-90, according to a scheme initially propounded by James Martin, was revived in September 1898 and was finally rewarded with a decision by the government in November to proceed with the Barossa reservoir, a project completed at the end of 1901 84.

The frequently expressed proposal to dam the Para for a recreational facility was finally undertaken by voluntary labour in 1912, the Gawler Corporation having decided in 1910 that it could not afford the construction of a weir for this purpose. A barrage was erected across the South Para between the Gawler West and Goose Island foot bridges, and the area created gave much pleasure for two seasons before being allowed to fall into dis-use from 1914. In May 1919 a new weir over the South Para, undertaken by the Corporation, was completed, but again inadequacies of construction were quickly evident and resulted in the area created falling into disuse within a few seasons (it was finally blown up in 1933)85

From the late 1960s a whole range of new activities were undertaken by the Corporation with a view to encouraging commercial and residential growth within the township boundaries. An extensive sewerage project was begun in 1969 and in March 1970 the Engineering & Water Supply Department, Sewerage Branch, declared the Gawler Township a sewered area. The provision of sewerage in Gawler was of major significance, particularly to the Council as the local Health Authority. Poor soakage had for years resulted in difficulties related to effluent disposal and provided many hours of debate and deputation to government ministers and Departments by Council.

In the last 30 years of the 19th century. most local services were initiated by the newly established Corporation, with emphasis on road improvement and maintenance (kerbing, footpaths and road metalling. Parkland improvements, fencing of public areas and extensive tree-planting were also undertaken. Much work was done on to construct recreation grounds with an oval and bicycle rack; the erection of an Exhibition Building in 1882 and of stockyards in 1883. Towards the end of the 19th century, the Fire Brigade Service was regularised and upgraded by coming under the Fire Brigades Board of South Australia.

The enlarged Gawler Corporation continued its long history of involvement in a range of services (although relinquishing their control of the lighting facility) and, with the extension of the Building Act 1923 to Gawler in 1926 became more directly responsible for the regulation of the physical environment and the encouragement or modification of particular proposals.

After some years of neglect, tree planting was from the 1930s again given much attention, and willows and poplars were planted along the river banks. More parklands were created and facilities progressively updated to cater to the increased population and local demand. The Corporation was also particularly active in seeking to attract new industry to 'Greater Gawler' from the 1930s and to foster the traditional commercial activity of the town.

The most striking development throughout the 1920s and 30s was in the growth of the number and range of community service groups. These included a local division of the St. John Ambulance (1936), a branch of the Country Women's Association (1940), the Gawler Traders' Association (1947), Returned Services League (1948), Apex (1951), Rotary (1954), a Gawler Chamber of Commerce (1961), Meals on Wheels (1964), National Trust (1966) and an Arts Society and Lions Club (1967) 86 Such formal organisations were necessary to replace the more fluid community action possible only within a smaller and more compact population and reflected the growth and increased diversity of the Gawler community.

In the latter part of this period the activities of most of the government service departments and the Corporation itself were also much extended. The Engineering and Water Supply Department extended its premises in 1961, and proposed a new scheme (not undertaken) for a Gawler River weir in 1968.

Various drainage projects and improvements to parklands and public facilities were also undertaken in 1968 to 1970 and in January 1972 a Council submission sought State Government Assistance for the controlled development of Gawler as a major civic, commercial industrial and residential city. There was no immediate response to this submission, but the renewed upsurge in building and commercial activity in 1973-1974 was to reinforce awareness of the need for development planning and controls.

Local community activity was instrumental in initiating in 1970 a major Cottage Homes project and, after delays because of the lack of funds, the first homes were completed in mid-1973. This and subsequent Government community welfare activities reflected the increased composition in the Gawler community of the elderly, while the needs of the young were also recognised by the extension of educational, recreational and sporting facilities by State and Local Government bodies and by community groups in this period.

Do you remember Gawler Thematic History - Services ? Then Join up and add your memory here. 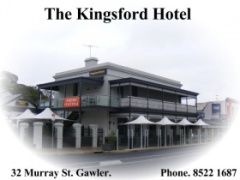