In 1900, The Bunyip Newspaper published a public notice placed by the Mayor of Gawler, advising all interested parties (not just ratepayers) of a public meeting ‘to consider what steps shall be taken to perpetuate the memory of James Martin’. Councillor Wilkinson's suggested: " that the least that should be done was to show appreciation in some tangible way that would be lasting and would speak to future generations." He proposed that the funds would have to be raised and he believed that a ‘statue or monument erected in some conspicuous place in the town would speak to all the people who entered Gawler, and would show them Gawler’s estimate and the colony’s estimate of the worth of James Martin."

The James Martin Memorial Statue was carved by artist Gustave Henri Marchetti, a French painter, etcher and sculptor who executed the work in Italy after being engaged by Mr G. E. Morgan of Adelaide on behalf of The Martin Memorial Committee chaired. The statue was revealed in 1903.

The James Martin Memorial Statue was originally located on the corner of Murray Street and Calton Road. It was moved in 1968 to Whitelaw Terrace, near the corner of Tod Street, Gawler.

A public tribute to his worth

The plaque which was attached in 1998 reads:

Click here to view photos of the corner where the memorial once stood. 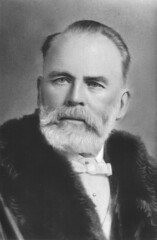 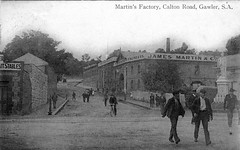 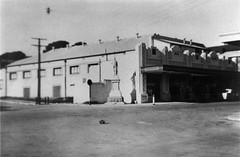 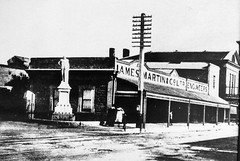 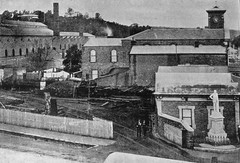 Corner of Calton Road and Murray Street, Gawler, after 1903 but prior to early 1930s 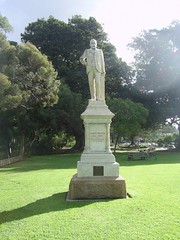 Do you remember James Martin Memorial ? Then Join up and add your memory here.