Below, is the speech delivered on the morning of Saturday 15th November 2014, by our new Mayor Karen Redman, by the memorial, to celebrate the restoration of the memorial to James Martin.-

One cannot do proper justice to acknowledge the vast contribution that James Martin made to benefit the Town of Gawler. I acknowledge that much of this information comes from E.H. Coombe MP. History of Gawler 1837 – 1908, George E. Loyau’s “Gawler Handbook”, and Derek Whitelock’s book called “Gawler”.

James Martin was born on 23rd April 1821 to John and Jane Martin on Foundry Road in the village of Foundry in the Parish of Stithians, in Cornwall. In Whitelaw’s book “Gawler”, he wrote “some men are born with the supposed advantage of a rich father. James Martin had no father at all when he was born, and his mother, who had been widowed for several months, had seven little children and was in poor circumstances.”

He had little schooling but he did, however, inherit knowledge relating to things mechanical from his mother’s father John Bryant who had a small foundry, from where the village got its name, and it was there that James learned his trade….he became a millwright, but, being asthmatic, Australia’s drier climate was beckoning him.

Aged 25, he arrived in South Australia on the “Belle Alliance” in 1847 and after a time in Willunga working for John Ridley, the inventor of the Ridley Stripper and Reaper. James was married in Adelaide to Christiana Fox [born 1818] on 28th March 1848 and he arrived in Gawler on 15th June 1848.

To digress briefly, they had 2 children: John (1850-1925) and Christiana. His wife Christiana died at childbirth on 26th April 1852 at age 34, their surviving daughter also named Christiana died 2 months and 10 days later from “decline” on 28th June. Both Christianas were buried in Gawler Town Cemetery, now called Pioneer Park, in plots 6 and 10 respectively.

James then married Ann Lock in Adelaide on 6th March 1853, but later that same year, Ann died in childbirth on 7th December 1853 aged 35; she too is buried in Gawler Town Cemetery, plot #21.

In June 1848, he travelled to Gawler in a dray containing his wife Christiana, their furniture and a few tools. He cut down a red gum tree and constructed a bench and a lathe. [His lathe still exists and can be seen in the Gawler National Trust Museum.]

He began building bullock drays and on the expansion of agriculture, he turned out wooden ploughs and in 1852 he advanced to reaping machines. He studied the wants of the farmers, made improvements, and kept his workmanship up to such a state of efficiency that many competitors were beaten, and his Gawler firm enjoyed the greater portion of the agricultural machinery trade. Many blacksmiths admired his dexterity and skill and he worked from 6am until 11pm for weeks at a stretch. The improvements he made to strippers alone were lengthy. The first stripper sold for 150 pounds. The aspects of his inventiveness were universally adopted. Over time, 16,000 strippers were produced by his firm. His Company was one of the first to make the Stump-Jump plough.

He was one of the Founders of the Gawler Institute, gave a portion of land for the erection of the present Institute building and he also supplied the plans for it. In 1858 to 1860 and also in 1867 he was the Institute President, its first Treasurer, and later became an Institute Trustee. In 1860 he was Vice-President of the Agricultural Society, Past Master of the Lodge of Fidelity in 1860, 1869 and 1870, a Director of the Building Society, and a private in the Gawler Rifles - later to become Captain. He was one of the first members of the Council of the School of Mines.

James Martin was elected as Member for Barossa on 20th February 1865 in the House of Assembly and served for 3 years without seeking re-election and on 8th May 1885 was a Member of the Legislative Council until his death on 24th December 1899.

In the 1860s, James Martin expanded to the construction of mining machinery and general engineering. Boilers were built in the 1860’s and engines in the 1870’s. At that time, large deposits of iron ore were discovered in the Barossa but the coal used in the smelting process needed to be brought from far away, which made the smelting process an unprofitable one. Of the local iron ore smelted, some was used to form the railing in the front of the Gawler Institute.

He secured a shop close to the current arcade opposite the Murray Street Post Office and gradually took over the whole of Acre 12, which includes the present Interwork building in Walker Place. He then expanded across the road to where our old picture theatre stands on the corner of Calton Road. When the blocks on the corner of High Street and Calton Road were ultimately secured, it was there that the principal engineering buildings and plant were erected; with dimensions of 637 feet by 550 feet. He also expanded to Tod Street. The total area of his enterprise was around 18 acres.

In 1873, he brought into his partnership one Frederick May, whose skills and experience in mining machinery, crushing plants, winding machines and pumping plants was most valuable and welcome. The biggest engine they produced was of 500 horsepower.

James Martin’s manufacturing of agricultural implements was beginning to extract orders from all parts of the State. Gawler developed a consciousness of its importance. Its fame as a go-ahead centre became known far and wide and there was drawn to Gawler colonists of remarkable integrity and public spirit.

In the 1880’s, James Martin expanded his manufacturing to railway rolling stock and good wagons. In 1888 he was contracted to manufacture 47 locomotives for the SA Government and in 1890, a further 152 were contracted to be made. Orders came from Tasmania and Queensland.

Coombes said on Page 26 “Consequently, along with its industrial advances, there was displayed a civic activity which gave the Town a distinguished position in Colonial life. There was a dash, a skill, a comradeship which conceived large and worthy projects and carried them out successfully, in spite of great difficulties. Gawler became famous because of the courage and vigour of its people and because of their high intellectual standard. Wit and wisdom of the first magnitude scintillated in the firmament of Gawler life, and flashes of culture imparted brilliance and distinction. “The Colonial Athens” is a complimentary appellation applied to the Town in recognition of the intellectual qualities of its life at that period.”

Loyau page 47 says “The firm has been engaged upon the construction of some of the most important works in the Colony, embracing every department in the science of engineering, the construction of bridges and flour mills, shafts, screw propellers for steam ships, and steam engines, railway carriages and wagons….Gawler had both the ways and means in the Colony for undertaking any description of work that may arise in the connection with the extension of our railways.”

His son John Martin had elected to be a farmer, and it was James Martin’s nephew John Felix Martin, 23 years his junior, who was brought up by James Martin who became a partner of Phoenix Foundry to ultimately be appointed General Manager and, on James Martin’s death, became Chairman of Directors.

E.H. Coombe page 17 states that from 1848, “He laid the foundations of an industry which made Gawler famous throughout the Commonwealth and which played a greater part in the extension of the Town than any other material factor.”

Whitelock stated that “He has spent 50 years of his adulthood in this Town; he has seen Gawler transformed from a bush hamlet – noted for its mud in winter and its dust in summer – to one of the largest and most picturesque towns in Australia. He sowed the mustard seed of the iron manufacturing industry and he nursed the tree so well that it is now the envy of Australasia and the wonder of the world."

Whitelock said on p61 “Gawler cannot be imagined without his long and fruitful presence. Had Martin never existed, we can doubt whether the Town would ever have prospered quite so well…..Genius would not be too strong a word – Gawler became in colonial times the only important industrial centre outside the metropolitan area. The Town’s fine buildings and cultural activities and its pride as being known as “the Colonial Athens” all had their taproot in the grime and noise of the workshops of James Martin and Co.”

James Martin died on 24th December 1899. After his death, a public movement was inaugurated to perpetuate his memory and this Carrara marble memorial was created. It was first erected on the corner of Calton Road and Murray Street and his statue was described as a “speaking likeness”. The statue was eventually shifted to Whitelaw Terrace on 2nd June 1969.

Loyau p52 says “James Martin is one of the most conscientious and honourable of men; esteemed by all who have the pleasure of his acquaintance; he goes on year by year adding to his friends and decreasing his enemies.”

His influence on Gawler, industrially and otherwise, was far reaching and “the Father of Gawler” title was bestowed as a mark of veneration and honour. 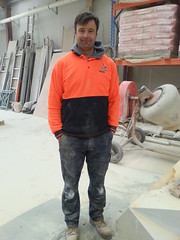 Paul Davidson made the expert repairs to the memorial. A new nose and replacement/restoration of some of the fingers and the coat front were the main priorities.

Do you remember James Martin Memorial restoration October 2014 ? Then Join up and add your memory here.