On the 2nd February 1896 the Engineers went on strike over reduced pay conditions, taking the working day from 8 hours to 9 hours, and a co-operative scheme. A minimum of 10/- a day was demanded. The engineers were joined in the strike by the boiler makers. A resolution was reached and the strike was terminated on the 7th March. However the workers were not completely satisfied and continued the strike from the 16th March until the 22nd May when both parties made concessions in their demands. The working day was to stay at 8 hours.

There was a further strike on 12th June 1916 when the business was operating as Perry Engineering Works. 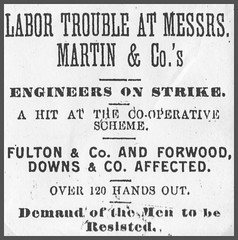 Do you remember James Martin Phoenix Foundry Strike ? Then Join up and add your memory here.