This tale began in Sheffield, England 1791, when a young boy Thomas Milner began an eleven year apprenticeship as a tinsmith and brazier. These days such a trade would be known as a sheet metal worker, with only a 4 year apprenticeship. “He learned well and began to manufacture iron coffers and strong boxes.”

In 1814 Thomas established a company and in 1824 won an official contract to supply the British War Office with “coffers and strong boxes”. At that time The 1st Duke of Wellington, Arthur Wellesley granted Thomas Milner a Royal Warrant, for his goods and services. Thomas then moved to the City of Liverpool and set up the Company of Thomas Milner & Son in 1830, where rapid growth necessitated the erection of new premises in 1853. By this time Thomas was busy making fire proof safes and strong boxes.

Meanwhile a 33year old solicitor from Exeter in the south of England, had arrived in the State of Victoria in 1853. His name was John Rudall and he soon travelled to Adelaide in Sth Aust, then settled in Gawler, with his new wife Matilda. John was obviously a man of substance and well able to establish himself in local affairs, as well as to found a legal practice, Rudall & Rudall Lawyers.

Just how or what brings these three men, a Tinsmith, a General (who fort and won the Battle of Waterloo) and a Lawyer together in the 21st Century?

I was asked to give an opinion on a metal box, situated in a storage area at the premises of Rudall and Rudall, here in Gawler. At first it seemed like just any old box, but the sides, top and bottom are quite thick (around 45mm) and it is heavy as all air spaces are filled with sand and cement. The lid is hinged and still lockable. The box has two brass insignias attached to it, one most likely a trade identification plate. The other though did catch my attention! After further research, I along with Rudall’s office manager, are confident that it is a Royal Warrant, as granted by the Duke of Wellington, otherwise known as the Iron Duke.

As a child growing up in London I recall seeing these on wrappings and on delivery vehicles but have never seen any since, it’s a real gem. Consideration of all the above dates and information leads us to settle on 1841 as being the most likely date of manufacture. Cast Iron Handles fitted to the box sides have Thomas Milner and Son cast in them, thus confirming the manufacturer.

No doubt John Rudall needed a secure box to convey vital items/documents from England UK to the new colony here in Gawler SA. An amazing link back to the establishment of the Gawler Corporation in 1857. 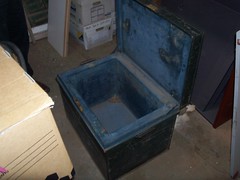 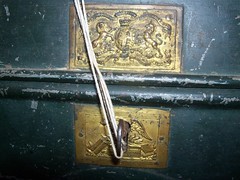 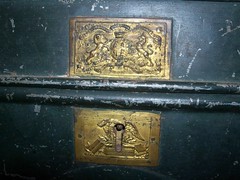 Do you remember John Rudalls Strong Box with Royal Warrant ? Then Join up and add your memory here.