Rudall & Rudall was founded by John Rudall who established a legal office in Gawler in 1854. John Rudall was the first Town Clerk of the Town of Gawler and served in that role until he was appointed as the resident Gawler Magistrate in 1881 to coincide with the opening of the Cowan Street Courthouse. John Rudall's son, Samuel Bruce Rudall, took over both the legal firm and the position of Town Clerk (1881-1914) and was a State MP for the local area from 1905-1915. Samuel's son Reginald (RJ) became a Rhodes Scholar in 1908 later joining the legal firm and becoming State MP from 1933-1955 including seven years as Minister for Education and nine years as Attorney-General in Playford Governments.

The Rudall Family connection was tragically affected by the loss of both children of RJ and Kathleen Rudall, John and Peter, in action in the Second World War. Peter went down with the HMAS Sydney in unexplained circumstances, while John (or Jake) was killed leading his platoon in New Guinea.

The Rudall family connection to the legal practice ended in 1955 when RJ died and Lawrence Bills then took over the practice. Lawrence commenced at the firm in 1937 and continued to serve the community of Gawler until his death in 1974 when his son Tony Bills continued the Bills tradition.

The firm helped to set up the Hutchinson Hospital, which is now the Gawler Health Service. Throughout its history Rudall & Rudall has always had members in prominent positions on the board of the Hutch and then the Gawler Health Service, and also on the Gawler and Districts Aged Cottage Homes board since its inception. Rudall & Rudall sponsor and support numerous community organisations including Gawler Health Foundation, Gawler High School Foundation, Gawler Community Retirement Homes, Gawler History Team Inc, Rotary, Apex, Gawler Town Band, Trinity College, and Neighbourhood Watch.

Please click here to see photos of Rudall and Rudall.

On 1st August 2019, Peter Ryan (assisted by legal partner Nick Pullman) addressed the Gawler History Team on the subject of the History of Rudall and Rudall and the legal fraternities in Gawler. See the Video below. 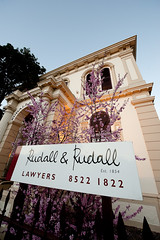 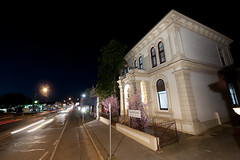 Do you remember Rudall & Rudall ? Then Join up and add your memory here.