SOLDIERS IN THE MAKING.

Gawler is again the battle ground for the making of youth into soldiers of the Commonwealth, and on Wednesday there was an invasion of over 2000 young men, representing the 3rd Infantry Company, to go under canvas for eight days, on the heights known as Gawler Hills, about half a mile from the town.

The battalions represented are the 10th, 27th, 43rd, and 48th, together with 45th Div. Signallers, 3rd Field Ambulance, and the Army Medical Corps. It was fitting that the 10th battalion should have the honor of leading the way into the town from the station, as the residents have many poignant memories of the original boys of this battalion, those gallant soldier sons of the State who first landed and stormed the heights of Gallipoli, shedding their blood like water but making fame for Australia as they struck terror into the hearts of Turks. Smartly yet unostentatiously the 10th swung up Calton Hill to their quarters, gaining the commendation of the Brigade Commander and Camp Commandant, Col. J. C. F. Slane, D.S.O., V.D.— "A fine turnout; one of the best I have seen."

Troops from the second special train also marched up Calton Hill; the third swung along Murray street, and headed by their band, made a most inspiring sight; and the fourth special train emptied its loading of troops on the Angaston railway near to Mr. Eime's residence. Immediately on arrival there was the welcoming call on the bugle, "Come to the cook-house door, boys," and readily did the boys "tuck in" to the roast beef, potatoes, etc., prepared by the many cooks.

Wednesday afternoon was devoted to "shaking down," the troops being shown how to prepare their tents, bedding, etc., with personal labor in the filling of paliases with straw. Towards evening there was a muster parade, and afterwards medical inspection to prevent any out break in infectious disease.

Thursday saw the first of the training in earnest, the troops being handled in sections. Today and Saturday the troops will indulge in field training including field firing, two firing grounds, being provided on the wide scope of country now under control of the military authorities, by proclamation.

Sunday will be the spectacular day for the public. Church Parade will take place at 10 a.m., and at 11 a.m. will be the Ceremonial Parade a wonderfully attractive demonstration, to which the public are heartily invited. Afterwards the camp will be thrown open to visitors.

Monday will witness company training, the whole of the work leading up to the grand climax on Tuesday, when battalion tactics will be indulged in, giving the trainees an idea of what real skirmishing is like. Several miles of open country are available for this purpose. On Wednesday camp will be struck.

The advance guard of this army of trainees did not make a good impression on local residents, particularly those residing on the routes to the camps, the visitors again taking liberties with picket fences, garden rockeries, etc., the battens being torn off and the stones carried on to the roads as causeways.

Desiring protection against repetitions of damage done by previous camps, a petition largely signed was sent the Commissioner of Police, who himself an oId soldier, at once saw the need of strict discipline with protection to civilian property. Extra police were forwarded to Gawler, and as an addition, a cycle patrol was also allotted. This promptness by the Commissioner together with the vigilance shown by Sgt. Hansberry and his local staff kept the town very quiet and orderly, the only sounds of revelry being the community singing of the boys as they wended their way up the hill to the camp.

The open invitation of Col. S. Slane, Commander of 3rd. Infantry Brigade and Camp Commandant of the infantry training camp at Gawler, for the public to witness the ceremonial "march past," and saluting of the colours, brought out an immense assemblage of people on Sunday morning. The march past was timed for 11 a.m., and long before that hour all cars speeded for Gawler. Military traffic controllers parked cars on one side of the road the full length of the allotment occupied as a training ground, and the overflow were sent off along the Calton Road continuation, whilst others were parked in an adjacent allotment. Fully 500 cars must have been assembled and the march past was witnessed by over 2,000 people.

Marching in companies, to the music of their bands, the famous 10th battalion led the way; followed by the 27th, 43rd, and 48th battalions; then the 3rd. Field Ambulance, Signallers and A.M.C.

The sight was a most spectacular one, and although the red dust rose in clouds and smothered the people, they waited until the conclusion of the ceremony. Twice past the colours marched the troops, and were then returned to their parade grounds and dismissed for the day. A thrilling emotional ceremony was witnessed on the parade ground of the 10th battalion. Their's is the only battalion with war honours — the originals were the gallant boys who stormed the heights of Gallipoli, and afterwards were famous in the fields of Egypt and France— and before dismissal the troops honoured the colours. The colour officers marched ceremonously to the front, where the colours were saluted and the soldiers stood at attention with arms flashing as the proud flags were borne away to safe keeping of the battalion.

The camps were afterwards surged by the public, every latitude being given to see for themselves the preparations and arrangements made for the boys in training.

The Gawler Hills are now the camping ground of the 6th Cavalry Brigade, made up of Light Horsemen from Mount Gambier in the south and Orroroo in the north. They came in on Tuesday and at once settled down to training, the camp for the greater part being allowed to stand after vacation by the infantry. In all there are about 900 horses in the lines. The camp is under the command of Colonel T. A. Brinkworth, Brigade Commandant and the Staff Captain is W. E. Pascoe.

Yesterday (Thursday) the camp was visited, and inspected by His Excellency the Governor; and to-day (Friday) the Chief of the General Staff of Army Headquarters in Melbourne will arrive. Units in the camp are the 18th (the only compulsory Light Horse unit and situated in Adelaide); the 9th (Port Pirie; 23rd (mid-northern); Signallers Army Corps, and Army Medical Corps.

On Saturday afternoon the troops will indulge in a Sports meeting on the Gawler Oval, when the executive is looking to the general public to give their hearty support by patronage. On Sunday a Church Parade will take place, and at 11 a.m. the troops will march pass. In the afternoon the camp will be thrown open for inspection by the public.

Click Here to view photos of Military in Gawler

Nikki Wight writes: My grandmother, Hazel Attrill (nee Mitchell) says Jack Ronald 'Ron' Mitchell was in the Light Horse and she believes the group photo was taken whilst Ron was training with the Light Horse at Gawler (Nanna is 94 but has an excellent memory so this is likely to be correct, she also recalls she was in church with her parents when they heard the 'boys' ride home from training). Nanna, Ron & family were from Koolunga so his individual photo probably isn't relevant to 'Gawler History' but I have included it as his uniform may help to date the photos - Ron & his horse 'Minnie' are indicated by the red line in the group photo. I suspect the photos were taken in the 1930s during the inter-war period or early during WWII - the individual photo has 1938 on the back but we don't know who wrote it or when (Ron was born 1915, so it wouldn't be before 1930 and he went on to serve in the RAAF during WWII - his WWII RAAF records aren't available online yet so I am not sure when he enlisted with them and I have not been able to find any army records to date his Light Horse involvement). <Click here> and <click here> to see Nikki Wights photos. 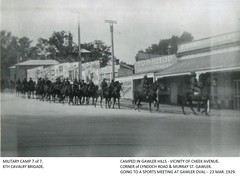 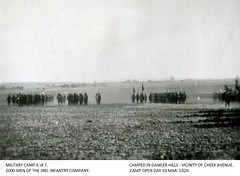 Memories of Military Involvement in Gawler

Do you remember Military Involvement in Gawler ? Then Join up and add your memory here.