BILLS Lawrence Transcribed from a blurry Page 6 of The Adelaide Church Guardian, May, 1974 and we thank Frankie Bills for sharing this information. Mr. Lawrence Bills - Born 18-1-1913 and died c4-5-1974.

Mr Bills was born in Gawler and lived in the district most of his life. As well as being the Senior member of the legal firm Rudall and Rudall in Murray Street, he was also associated with service, church and hospital committees in the district.

Mr Bills was chairman of Trustees of the St. Georges Church and cemetery, and was a former church warden and synodsman. The Anglican Rector of Gawler, The Reverend E. J. Waterhouse said Mr. Bills was largely responsible for the re-building of the church organ. The organ was dedicated by the Archbishop of Adelaide, the Most Reverend Dr. T. T. Reid at the St. George’s Patronal Festival on April 28 this year.

Mr. Bills served with the A.I.F. in New Guinea during World War 2 and was a member and former secretary of the Gawler sub-branch of the R.S.L. He was a foundation member and first vice-president of the Rotary Club of Gawler which was formed in 1954. Rotary Club President Mr. Frank Forgie, said Mr. Bills had been a great help to the club over the years.

Mr. Bills also held the position of Chairman and Deputy Chairman of the Hutchinson Hospital board and also chairman of trustees. On the professional side, he was for many years the solicitor for Gawler Town Council, Salisbury Council, and the District Councils of Munno Para, Barossa and Mudla Wirra.He was widely known for his knowledge of the Local Government Act.

Mr. Bills joined Rudall and Rudall before the Second World War on the retirement of Mr. A. B. Crace. He was in partnership with Mr. R. J. Rudall MP for many years, and in 1949 he took over the practice himself. Mr. Bills, who lived in Gawler East leaves a wife, a son and daughter.”

More information re Lawrie Bills can be found within the Peter Ryan address on the video below. 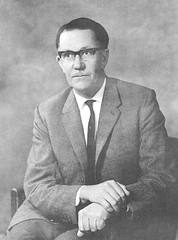 Do you remember Bills Lawrence McAusland ? Then Join up and add your memory here.