This information has been transcribed from The Adelaide Church Guardian of May 1974.

“A note on the history of the organ (from notes supplied by Mr. L. McA. Bills) The organ was originally in the gallery (1877). It was a two manual and pedal organ using a barred chart for the pipes, and it had a tracker action. The console was built into the organ case.

The organ was removed from the gallery sometime after the chancel was completed in 1887. It was set upon a small platforming the South Transept. At this time, it was entrenched by J. E. Dodd of Adelaide who added the bass octave of the Dulciana and Clarabella stops to the Great organ.

Wind was provided by hand-lever but at some stage a wheel arrangement was in use, driving a crank connected to the blowing lever. Later a single phase one horse-power electric motor driving a centrifugal blower was provided and this has recently been renovated and will be used for the re-built organ.

In 1962 the Vestry entrusted the oversight of the re-building of the old organ to Mr. L. McA. Bills. It was decided to convert the instrument to electric pneumatic control. This system allowed the organ to be raised to an elevated platform where it would sound better. It also provided a clear space beneath for a Vestry. It also allowed a fuller and easier use to be made of the existing pipes and permitted the organist to play from a distance where he could better hear the effect of his playing. It was also decided to bring the organ playing console into accordance with the recognised standards of the Royal College of Organists, this requiring two new keyboards of 61 notes and a new set of concave radiatery pedals, 32 notes. It was recognised that the project would be limited by the lack of funds and that the builder would have to carry out the work over several years receiving payments as money became available.

Mr. Edgar G. Bowes agreed to undertake the re-building on these terms for $4000.00. He began in December, 1962. Others who have assisted in the re-building programme include Mr. Bills who, among many other things, cleaned and repaired most of the old pipes.

Mr. W. Hockey directed the working bee which built the platform upon which most of the mechanism has been placed.

Mr. Brian Cornelius did most of the work on the fine cedar case to enclose the keyboards and mechanism of the playing console which stands on the north side of the transept near the choir stalls. The work on the case was completed by Messrs. Frank and Graham Forgie. The electric wiring runs under the floor and up to the pipe organ on the platform.

Mr. Frank Forgie was responsible for the new front panelling with accessible doors to the Vestry at each end. The old keyboard stopped short at the treble end and it was necessary to obtain five more pipes for each separate rank of pipes to complete the top octave on each manual. Mr. Roger Jones, a young Adelaide engraver, has made the missing pipes and also some larger wooden pipes to complete the pedal organ.” 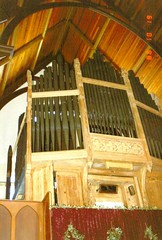 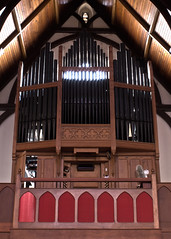 Do you remember Organ at St George's Anglican Church ? Then Join up and add your memory here.