John Bleby was born in the rectory of St Paul’s Church Adelaide in 1913, the youngest son of Canon E. H. Bleby and his wife Annie (nee Porter). He knew he was called to the priesthood at the age of 13 on the day of his Confirmation. He attended Pulteney Grammar School and St Peter’s College, where he came under the significant influence of the headmaster the Rev’d K. J. Bickersteth. He studied for an Arts Degree at St Mark’s College in the University of Adelaide, and trained for ordination at St Barnabas’ College.

He served as a faithful parish priest and teacher at Millicent, with Robe and Kingston, and at Strathalbyn, before he came to Gawler in 1951. When he arrived, the rectory garden was full of rubbish and long grass, and the parish roll was twelve names scribbled on the back of an envelope. The bishop said he would be doing well if he lasted two years. He stayed for seven years, and built up a flourishing parish. His recipe—prayer, and visiting. His teaching, through sermons, Confirmation preparation, and Religious Instruction in the Schools, gave many a deep and thorough grounding in the Christian faith. He also oversaw the repair, restoration and enhancement of the church buildings: St George’s (built 1858–1909) and the Church of the Transfiguration, Gawler South (built 1895).

Married to Mary (nee Harvie) in 1940, they had five sons: David, Peter, Martin, Michael and Andrew. Mary was active in Mother’s Union, and produced a number of plays in the Church and in the Parish Hall.

After he left Gawler in 1957, John Bleby went on to serve in the parishes of Burnside, Balhannah and Renmark, and as an Archdeacon active in the Diocese and in the national Church, followed by a fruitful retirement. He died in 2001, aged 87. 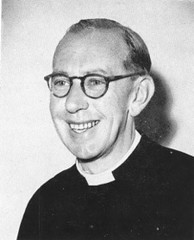 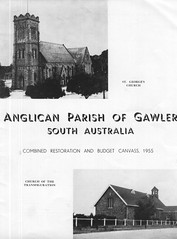 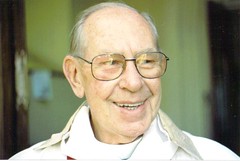 Do you remember Bleby Rev John Raymond ? Then Join up and add your memory here.