NEW PICTURES TO AMAZE YOU

Take a look at the 360 degree images from Church Hill Photography CLICK ON HERE ON KUULA LINK TO SEE THESE SPECIAL PHOTOS: https://kuula.co/explore/collection/7fWzB

Our thanks to Neil Jacobs for his valuable contribution to our website - May 2017.

The first Church of England services in Gawler were conducted in 1839 in the little sitting room at the home of Mr. John Reid at Clonlea (on the north bank of the North Para River in line with Murray Street). At this time there were no houses in Gawler. The first Colonial Chaplain Rev. C. B. Howard occasionally rode his horse 25 miles from Adelaide’s Holy Trinity Church to minister where necessary. During 1845 the Rev. James Farrell, the Colonial Chaplain of Holy Trinity, Adelaide, chaired a meeting of the Members of Friends of the Church of England and £100 was raised for the building of a Church at Gawler.

In 1846, the Rev. William Henry Coombs (formerly curate of St. Martin’s-in-the-Fields, London was sent out from England by “The Society of the Propagation of the Gospel”. Services were held in the basement of the Victoria Mill, (then under construction). This was the beginning of Rev. Coomb’s 50 years of service to the Anglican Church, Gawler (formerly Church of England).

The foundation stone of the first church to be built was laid in 1847 by His Excellency Governor Robe, on land known as Orleana Square (Church Hill) surveyed by Colonel Light. The Church was named after England’s patron saint (St George) and in honour of Colonel George Gawler. The Church cost £800 to be built. Five years after completion this building was severely damaged by a storm.

A day school was built in 1850 where the tennis courts now stand. Thirty-five scholars attended under the guidance of M. L. S. Burton. The building now known as the Parish Hall was constructed as a school in 1866. Additional rooms to the front and back were added in 1911 to accommodate the increased number of students. As recently as 1984 this building again became a school under the guidance of Rev. J. B. Kinsman and church members. Hence Trinity College was established. It is now situated south west of Gawler Township and with five schools and one Montessori school, is the largest school of its type in the Southern Hemisphere.

In 1858 the foundation stone was re-laid for the Nave of the new building on the site where it stands today. The architect was Edward Angus Hamilton and the design is early 14th century Gothic. Materials used included blue stone and sandstone from local quarries and Welsh slate for the roof. The building was erected in stages - the nave in 1864, the transept 1884, and the chancel in 1887. The Church was consecrated on 23rd April 1894 by Bishop Kennion. In 1907 the first stone for the erection of the tower was laid by Archdeacon Young. The dedication took place on 28th April 1909.

An octave of hemispherical bells was placed in the tower in 1921 to commemorate those killed in the First World War. In 1950 the eastern end of the Church roof was re-slated with Spanish slate at a cost of £25,000. St George’s building has a National Trust “A” listing.

The church possesses a chime of eight hemispherical bells provided by this company in 1921. Our sales day book entry dated 23rd June 1921 advises that the work was invoiced to Sir Edward Lucas, Agent General for South Australia, Australia House, Strand, London WC2. It is clear that Sir Edward Lucas acted as a purchasing agent for the church. Our sales day book entry mentions the set of eight hemispherical bells with the largest 2’-7” in diameter, weighing approximately 3½ cwt. The chime was provided complete with supporting spindles, distance pieces, framework and a chiming apparatus for the freight on board London price of £315.0s.0d. source Whitechapel Bell Foundry Limited, Alan Hughes

Information about the stained glass and leadlight windows available here.

For information relating to the original Organ used in the Church, click here https://gawlerhistory.com/Organ_at_St_George%27s_Anglican_Church

Original Font, and Silver Paten and Chalice – donated by Stephen King in 1847. First Trustee and Warden. The present marble font was bought by subscription in 1889 and the original font was incorporated in it.

Ornate Alms Dish – with inscription “To the Greater Glory of God”. Donated by the Bishop of Adelaide and Mrs. Kennion. Dedicated on St. George’s Day 1894.

Silver Cruets – given by Cyril Prior, ex-Dunkirk Veteran. In memory of his wife Dorisse Marcell Clemence Prior.

Cruet Set – in memory of Undine Day. Given by her daughter Naomi. Blessed by Fr. Piers Davey at Pentecostal Service 31st May 2009.

Brass, Altar Vases – given by the family of the late Mr Hollaway 1904.

Silver Cruet Tray & Paschal Candle Stand – given by past confirmees.

Pyxes (2) – given by Guild members. Consecrated and Blessed by Fr. Piers Davey on 17th January 2010.

Sanctuary Lamp – in memory of George Downing. Given by his wife Mabel 1976. Dedication was conducted by Archbishop Rayner.

Oak Reredos – donated by Mrs James Harris in memory of her husband, a Trustee and Warden. 1897.

The Sanctuary – enlarged in 1955. In 1957 the original altar and reredos were placed in the transept.

The Lady Chapel was created and Altar Railings were placed in memory of Emma Crump who died in 1953, and Harry Blinman Dawkins, R.A.A.F. who died in 1944.

Large Stone Cross – to the memory of Elizabeth Brown by her daughter Madge Ormsby.

Pews – jointly donated in 1847 by Messrs Younghusband and King. The rental of these Pews each year made up a sizable portion of Canon Coombs stipend.

Altar Railings – of timber and wrought iron – donated by James Martin and Co. in 1857.

Eagle Lectern - given by Mrs Popham in memory of her husband, Frances William Home Popham who died in 1903.

Aumbry – set in the north wall of the sanctuary. A gift of the Rev. J. Kinsman in 1986 on the occasion of the 25th anniversary of his Ordination to Holy Orders.

Glass Entrance Doors – in memory of Mervin and Emelie Eime and their sons Victor and Oscar. 1962.

Two Lectern Bibles - a gift of the Bible Society to commemorate the R.A.A.F. ministries by Fr. J. Kinsman.

Public Address System – given by Jack Parham and sons in memory of their wife and mother, Marjorie K. Parham, 1978.

Pipe Organ – Built by W. G. Vowles of Bristol 1878 for the Church of St. Mathias On-the-Weir. Transferred to St. Jude’s Bristol 1946. Eric Strange, organist of St. George’s knew it to be redundant and proposed its purchase. The organ arrived in 1986 and was assembled by parishioners – Arthur Hidson, Christopher Short, Tom McDermott and Eric Strange. The beautiful wood panelling surround was the work of Frank Forgie. The service of Dedication took place in 1987.

Tapestry Kneelers – made and donated by parishioners.

1. Brass Plaque - in entrance porch. Commemorates parishioners who died in 1914-1918 war, in whose memory the bells were placed. Dedicated in 1921.

3. Brass Plate – in the sanctuary. Subscribed to by the congregation – to commemorate the life of Eliza Coombs who died in 1898.

Bishop T. T. Reed, Archbishop of Adelaide said “Our churches are not museums but utilitarian buildings erected for the work of worship – they will continue to be silent witness to the faith of the pioneers and to the foundation upon which they began to build our national life”.

Rectors and Assistant Curates of the Parish

We acknowledge information gathered from the writing of the late Trix McConnell, E.H.Coombe, P. & J Donovan. Thank you also to J. Statton, Trinity College. Thanks to Mrs Helen Hennessy for her valuable research on our Church and David Hilliard, Dept of History, Flinders University SA.

Compiled by Dorothy Hopgood and Jenny Evans 2010 © is an outline of the history of the Church, and all of the lovely stained glass windows are described in sequence; with maker's name and the details such as to whom the window is dedicated etc.

For photos of St. Georges Anglican Church and the surrounds of Orleana Square please click here.

St. George's Church Gawler, Order of Service at the Raising of the Top Stone of the Tower, April 28th 1909

Trix McConnell's memories of the parish are recorded in "Looking Back 150 years".

Click here for photos of Gawler and surrounds taken from the Church Tower in 2015.


TAKE A LOOK AT THE FABULOUS 360 degree images TAKEN INSIDE AND OUTSIDE OF ST GEORGES CHURCH from Church Hill Photography here: https://kuula.co/explore/collection/7fWzB

Long time Gawler resident Pat Harbison says "From the age of !0 years I lived in Adelaide with my Grandmother, Ina Davies (nee Deland), who was a daughter of Benjamin Deland, a builder in Gawler. The Delands lived in what is now the Anglican rectory in Gawler. She married her piano teacher E.H. Davies, who came from Oswestry in England, to take over the Gawler music students of his brother Charles Davies, who had died of TB (prevalent in those days). E.H. Davies later became Professor of music at the University of Adelaide (the Elder Conservatorium}. Some years ago, when helping the then Rector's wife (Joan Osborne) wash dishes in the Rectory kitchen, I noticed Benjamin Delands signature ("B.E. Deland") in the cement window sill over the kitchen sink. Don't know if it is still there. Hope so."

The following two books have come into the possession of the Gawler History Team Inc. via the Robertson Family as part of the Dr Dawes Collection: (click the links below): <St. George's Gawler Centenary Celebrations>

Please click here to read an article regarding the historic Church Hill tennis courts as printed in the Bunyip newspaper 8 September 2021.

Please click here to read an article about the 100 year anniversary of the church bells. 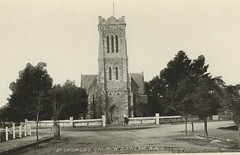 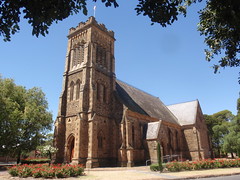 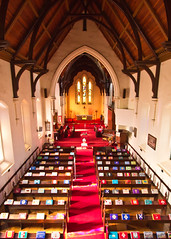 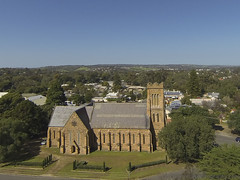 A lovely day in Church Hill 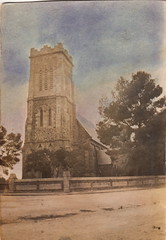 Do you remember St. George’s Anglican Church ? Then Join up and add your memory here.